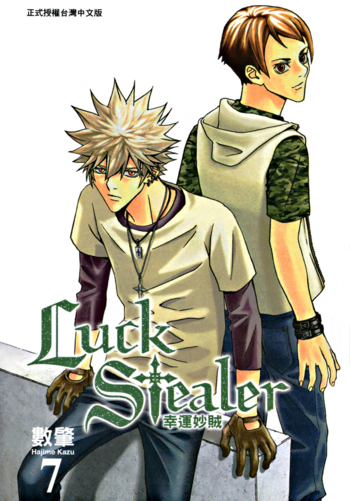 The titular Luck Stealer and Hound
Luck Stealer (ラック スティーラー) is a Japanese fantasy triller action-adventure shōnen manga series written and drawn by Hajime Kazu.Yusei Kurusu is "Luck Stealer", a Japanese assassin with the ability to drain a target of their "luck" and leave them only with misfortune. Soon after the target dies following an unfortunate series of events (example: a collapsing roof, an out of control car, or falling sign). He does so in order to sustain his daughter, Karin, who was born without any luck, and will die if Kurusu does not keep giving her it. She is the only person who can "receive" Kurusu's luck as she can’t make it on her own.
Advertisement:

The manga started in 2007 by Kazu Hajime which serialized in Shonen Jump. The manga balances between his brutal jobs and him doting Karin, as well as solving the mystery behind his powers and her condition. The series ended in 2012 with 10 volumes.