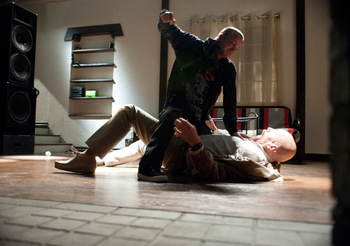 "Get the fuck out and never come back."
"I'm sorry, after everything you've done for me? What you've done for me?! You've killed me is what you've done! You signed my death warrant! And now you want advice? Alright, I'll give you advice: go to Mexico and screw up like I know you will, and wind up in a barrel somewhere!"
— Walter White
Advertisement:

In a flashforward, Walt picks up his broken glasses from the floor as spots of blood drip onto his Wallabees.

Hank has Walt drive him out to Los Pollos Hermanos once more to retrieve the tracking bug placed on Gus' car. Thankfully for Walt, the bug only shows Gus travelling between work and home: nothing to implicate him in any criminal enterprise. As Walt leaves Hank's house, he sees Tyrus watching outside and calls the police to report a "suspicious man", forcing Tyrus to leave.

At the laundromat, Walt is surprised to hear Jesse say he's ready to cook. He has a "friendly" conversation with Jesse about what he does after work, confirming that Jesse is still lying to him about his recent meetings with Gus and that Jesse still has not poisoned Gus with the ricin cigarette.

The following day, Hank asks Walt to drive him out to the factory farm owned by Gus. Walt feigns illness in order to delay Hank, then calls Mike to tell him of Hank's plan, so that he and Jesse can hide evidence of Gus' drug business.

As Skyler cooks her books by pretending to ring up customers between actual customers, Ted Beneke pays the car wash a visit. He reveals that he is being audited by the IRS for his own book-cooking, scaring Skyler: since she was Ted's bookkeeper, the IRS would be able to investigate her as well!

Back at the factory farm, as Jesse attempts to subtly persuade Mike that it would he unwise for Gus to kill Hank, a cartel sharpshooter begins to fire on them, killing one of Mike's men. Mike saves Jesse by pushing him out of the line of fire. A furious Gus steps out and starts walking in the direction of the sniper, undeterred as the shooter fires warning shots around him. That night, Gus makes a call to give a message to the cartel: his answer is yes.

Mike and Jesse take the dead operative's body to the superlab to dispose of it. Walt is inside, and goes into a diatribe against Mike and Jesse, assuming Gus killed the operative. Mike rebukes him, and warns him against calling the police on his men again. After disposing of the corpse, Jesse thanks Mike for saving him and asks about why Gus "pulled that Terminator shit" at the farm. Mike explains that the cartel can't afford to kill him: they need his distribution center. Jesse is concerned that he and Mike could be considered acceptable targets by the cartel. Mike suggests asking Gus about the matter.

The next day, Ted is at the IRS office to explain the errors in his bookkeeping. Skyler arrives, obfuscating ignorance and pretending to be an airhead whom Ted hired simply because he wanted to sleep with her. With the IRS convinced that the errors in his bookkeeping were because of ignorance of the law rather than willful fraud, Skyler advises Ted to pay the IRS what he owes, but Ted claims that he has no assets left: his used subcompact, which he now drives in place of a BMW, is testament to this.

That evening, Jesse arranges to meet with Gus at his home for dinner. Gus is sympathetic to Jesse's concerns about the cartel, but wants to know if Jesse can cook Walt's formula. Realizing what this would mean for Walt, Jesse tells Gus that he would have to kill him if he wants to kill Walt. Gus clarifies that what he wants is not Walt's death, but to stop a war with the cartel...

Walt, having secretly placed Hank's tracker on Jesse's car, reads the data from the bug as Jesse calls Walt and asks him to come over for some advice. When Walt arrives, Jesse evasively explains that Gus is trying to prevent a war with the cartel and wants Jesse to come to Mexico with him to teach the cartel their formula. Jesse is afraid that he might die during the journey if he messes up the cook, and wants Walt to coach him. Walt asks him repeatedly if he had met with Gus. Jesse denies it, but Walt knows he is lying: the ricin cigarette has not been used, and he knew that Jesse had been to Gus' house for two hours and eighteen minutes, during which time he never used the ricin and likely had no intention to.

When Jesse asks Walt how he knew how long he was at Gus' house, Walt produces his tracking bug. Jesse is appalled and asks how Walt could place a bug on his car after all he did for him.

"What you've done for me?!" Walt barks. "YOU KILLED ME, is what you've done! You've signed my death warrant! Now you want advice?! I'll give you advice: go to Mexico and screw up like I know you will, and wind up in a barrel somewhere!"

An enraged Jesse throws the bug at Walt, hitting him in the head. Walt tackles Jesse into the wall and the two get into a bitter fist fight, with Walt throwing Jesse on the floor and kicking him in the face. The fight ends after Jesse gets the upper-hand on Walt by tripping him on the table after Walt calls it quits, punching him repeatedly in the face and accidentally breaking his glasses.

After the two have a moment to catch their breath, Jesse asks if Walt can walk. When Walt nods, Jesse tells him...

"...then get the fuck out and never come back."