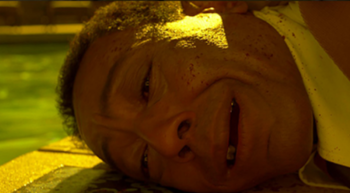 "Look at him..."
"This is what comes of blood for blood, Hector. Sangre por sangre."
— Gus Fring
Advertisement:

In a flashback, Gus pays Hector Salamanca a visit at his nursing home after having Mike finish off Hector's nephew (injured after his and his brother's attack on Hank) and hearing Juan Bolsa get shot and killed by federales over a phone call. Gus gloats to Hector about the death of his nephews and associate, mentioning the cryptic phone call that Hank received before the Cousins attacked him that lead to their demise. He leaves Hector to seethe impotently with a few parting words: "Sangre por sangre", blood for blood.

While undergoing treatment for his cancer, Walter chats with another patient who talks about giving up control of his life after his diagnosis. Walt, however, believes his acquaintance's philosophy to be "such bullshit": Walt states his belief that, regardless of his illness, he would live his life as though he was in control of his own destiny. Such words, however, ring hollow to him, for his life is no longer in his own hands, but those of Gustavo Fring...

Hank, the DEA, and APD summon Gus to discuss the fact that his fingerprints had been found in Gale Boetticher's apartment, where he had been killed. Gus explains that he had previously met Gale when he gave him a Maximo Arciniega Chemistry Scholarship, named in honor of an old friend who passed away long ago. Gale had invited him over for dinner recently to discuss a "business proposition". Hank is not entirely convinced: he asks if Gus' name really is "Gustavo Fring", mentioning that a Chilean national named Gustavo Fring immigrated to Mexico in the 1980s, but there was no record of his existence before then. Gus explains this away by claiming his records had been lost during Augusto Pinochet's regime. Gus manages to evade suspicion from the DEA and APD, but Hank is still unconvinced. As he leaves the DEA's office, Gus stands silently, seething in anger...

As Jesse has Saul deliver cash to Andrea so she can support herself and her son, Skyler works to conceal her husband's cash, keeping it in vacuum-sealed bags in the crawl space. That night, Hank asks Walt for a favor: to drive him to a gem and mineral expo show.

The following day, Hank reveals the real reason he asked for a ride from Walt: he continued to have suspicions about Gus, and wants Walt to stealthily place a tracking device on Gus' car. Walt is hesitant, but agrees to do it. At first, he doesn't place the tracker on the car as he goes inside to order a drink to maintain a cover of innocence. Gus is waiting inside, and in response to Walt's protestations of innocence, he tells him to "do it" while taking his order. Walt complies and puts the tracker on Gus' car, then desperately pleads into the cameras in the superlab that he placed the tracker unwillingly, and that Hank would not be a problem.

Walt visits Jesse afterwards, now more urgent about their plan to kill Gus. Jesse is dragging his feet in arranging a meeting with Gus to try to poison him. Jesse states that there were no meetings arranged, but while he isn't looking, Walt looks at the texts on his phone and sees that a meeting actually had been set up, but was cancelled, leaving him incensed.

Mike calls Gus to report that the DEA is not actively investigating him: as far as he knows, Hank is acting alone. More concerning is if Hank or the DEA catch wind of the cartel moving against him.

Gus removes the tracking bug before travelling to Casa Tranquila to talk with Hector. He informs him that the DEA is looking into his past, and the cartel had issued their ultimatum, before asking him, "Is today the day, Hector?"...

In 1989, Gus and his friend, Maximo Arciniega, met with Don Eladio Vuente, the leader of the Juarez Cartel, who is joined by Bolsa and a younger, physically-well Hector. Their discussion of the fast food restaurant they started, Los Pollos Hermanos, soon changes to discussions of methamphetamine, a secondary product that Max cooked and Gus helped to sell. They had snuck some samples to cartel members as a means of getting an audience with Don Eladio in order to discuss a partnership: the highly addictive nature of meth, combined with the simplicity of its creation and the ability to manufacture it without having to act as middlemen for the Colombian cartels, means Don Eladio could make even more money than they currently do working with Colombia to sell cocaine. Don Eladio approves of the idea, but is cross with Gus and Max for using underhanded methods to get his attention, and asks Gus why he should be needed when Max is the chemist. Gus apologizes, and Max desperately pleads with Don Eladio to forgive him.

Max's pleas are cut short by Hector, who shoots him in the head. Max slumps over, his blood and grey matter dripping into Don Eladio's pool. Gus lashes out at Hector, but Hector and Bolsa subdue him, with Hector forcing him to look into the eyes of his dead friend as Don Eladio warns a weeping Gus that he's only alive because "I know who you are. But understand: you're not in Chile, anymore."

Back in the present day, Gus asks Hector to look at him. Hector defiantly averts his gaze, to which Gus simply pats him on the shoulder and says "Maybe next time."