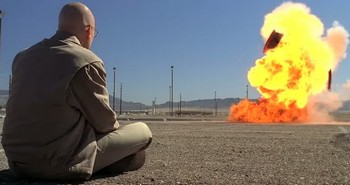 Walt has money to burn.
"So no matter what I do, hooray for me because I'm a great guy? It's all good? No matter how many dogs I kill, I just, what, do an inventory and accept?!"
— Jesse Pinkman
Advertisement:

Skyler arranges for Walt to return the car he bought for Junior. To Walt's chagrin, Skyler was only able to get a deal for $800 to return the car, even though it was barely used. Annoyed and spiteful, Walt takes the Challenger to an empty parking lot to do donuts in an attempt to get his money's worth for the car. After crashing it into a ditch, he puts the car's title into the gas and lights it on fire, using the title as a fuse to blow the car to smithereens.

Afterwards, he has Saul work to keep him out of trouble for his act of rebellion. Gus wanting him dead has left Walt at his wits' end, and he asks Saul if he can find an assassin who can "ameliorate the situation". Saul tells him it is a bad idea: all of the assassins he knows of work through Mike, and anyone he finds outside of his network would eventually have to contend with Mike. Saul suggests asking Jesse for his help instead...

Walt meets with Jesse at his house as he cleans the graffiti from his walls. Jesse's work with Mike has allowed him to be close to Gus on multiple occasions, making him most capable of killing him. Jesse tells Walt that Gus said he "sees things in people", and Walt asks him if he can be that easily manipulated by the man who wanted them both dead. He plays to Jesse's doubts and insecurities, bringing up Andrea and her brother Tomás, whom they suspect Gus had killed. Jesse tells Walt to "drop the sales pitch" and says he'll kill Gus the first chance he gets.

As Skyler continues to launder his money, overwhelmed by Walt's unexpectedly large salary, Walt puts into motion his plan to have Gus killed. In a room in the superlab that the security cameras cannot see into, Walt prepares a batch of ricin, the same poison he planned to use to kill Tuco months before. Walt states that poisoning was their best chance of killing Gus; if Jesse tried to shoot him, he'd be killed in the attempt. While not as much as the batch they cooked for Tuco, Walt assures Jesse that it would be enough; all he would need to do is slip the poison into something for Gus to eat or drink. No one would suspect foul play if a man of Gus' age working as hard as he did suddenly expired, except for Mike, but suspicions would be all he had. Jesse conceals the vial of ricin in one of his cigarettes.

As Hank takes Junior to Los Pollos Hermanos with the intent of getting a fingerprint from Gus, Jesse is taken to the Los Pollos Hermanos chicken farm with Mike to work as security for Gus' meeting with the cartel. Jesse brews a pot of coffee and prepares to slip the ricin into it, but is stopped by Mike, who gives Jesse a pistol and warns him to keep it holstered except for emergencies.

Eventually, the cartel's representative arrives: Gaff, a heavy hitter who helped the cartel rob Gus' trucks. Gus tells Gaff he is willing to pay $50 million to sever ties completely with the cartel. Gaff, however, is not interested in his money. Instead, he wants to know the answer to the question the cartel had sent him when he robbed his truck, if he was ready to talk. "Is it yes...or no?" he asks simply, before clarifying: "This is not a negotiation."

The meeting ends with both men at an impasse. As Gus and Gaff depart, Jesse considers shooting Gus in the back, but ultimately decides against it. He asks Mike about what Gus said to him about seeing things in people. Mike clarifies that, in Jesse, he sees loyalty, albeit "maybe for the wrong guy."

Afterwards, Jesse attends a Narcotics Anonymous meeting for the first time in a while. During the meeting, he admits that he relapsed but was clean now. The guilt from killing Gale still weighing him down, he admits to the group that he "killed a dog". One of the other support group members takes umbrage and chews Jesse out for his cruelty, but the group's leader calms her down, saying that they shouldn't pass judgment.

"Why not?" Jesse asks, saying that maybe he should've done something differently and that there was no point in accepting himself if it doesn't change anything, bringing up the fact that the group's leader killed his own daughter. Jesse's guilt becomes more than he can bear, and he finally admits to the group that he was trying to sell meth to them. "You're nothing to me but customers! I made you my bitch! You okay with that, huh? You accept?!"

"No.", the group leader whispers.

"About time." Jesse finishes. With the bridge of support from Narcotics Anonymous burned, he storms out.

As Jesse evades Walt's questions about whether he'd seen Gus and given him the ricin, Hank meets with Gomez and ASAC Merkert to discuss his findings in the Gale Boetticher case: the writings on the Los Pollos Hermanos flyer were parts numbers for an air filtration system he ordered that could be used for an industrial-scale meth cooking operation. The parts came from a German conglomerate, Madrigal Electromotive, which had a fast food division that had a franchise based in the American southwest: Los Pollos Hermanos. Since Gale was a vegan, he would have no reason to visit Los Pollos except to meet with someone: specifically, Gustavo Fring, whom Hank now suspects may be a drug kingpin.

Merkert thinks Hank may be reaching, while Gomez shoots down the idea that "Colonel Sanders" would have anything to do with Gale's death or the drug trade. Hank admits that it's a hard sell, but he has evidence that can prove compelling: Gus' fingerprints found in Gale's apartment...