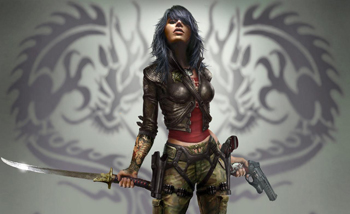 WET is a 2009 Third-Person Shooter developed by Behaviour Interactive (then known as Artifical Mind & Movement), with an emphasis on over-the-top acrobatic fight sequences of the sort found in movies directed by Quentin Tarantino.

The player takes on the role of Rubi Malone, hired gun and "problem fixer," who will take pretty much any job for the right price. She's got a reputation as one of the best in the business, so of course one day she gets double-crossed, almost killed, and not paid. Incredibly pissed at this turn of events, Rubi sets off on a Roaring Rampage of Revenge that takes her across three continents.

The major gameplay innovation offered by WET is that ability to shoot while performing any action. You have a fairly standard repertoire of Cinematic Platformer moves; jumping, diving, wallrunning, etc., but you can shoot while doing any of these, and the game's style makes it essential to do so. Firing while running only lets you fire one of Rubi's two guns, but firing while performing any sort of acrobatic action will activate "acrobatic slo-mo," sending the game into Bullet Time and allowing you to deal massive damage to your opponents by virtue of the fact that your reaction time and fire rate are an order of magnitude above any reasonable human level.

The game is presented in the style of a grindhouse movie, complete with film grain effects, little in-betweener cartoons, and, of course, ludicrously bombastic, over-the-top action sequences. The soundtrack is also totally awesome, inspired by the '70s and reminiscent of the musical stylings of Cowboy Bebop.

Oh, and Rubi is voiced by Eliza Dushku, which shouldn't be too surprising considering the kinds of characters she's played in the past.