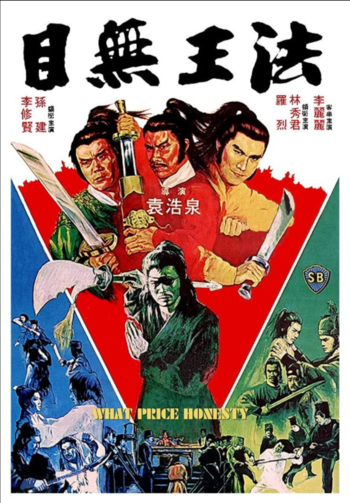 The Price of Honesty... is DEATH.

"What's the price of honesty?...I advised you before and you didn't listen to me." - The Fifth Master

The film revolves around three Ming Dynasty lawmen, He Zhong Heng, Luo Zhang and Ying Hao, who graduated in academy together. Sworn brothers and best friends since their days in training, all three of them are assigned in the big city as law enforcers for the Imperial court, but upon discovering the legal system is hopelessly corrupt and the civilians are being abused, the sworn brothers must question their choice: between loyalty, or duty.

Far darker and more realistic than most of the Shaws' period pieces released at the time, What Price Honesty paints the costumed period-piece universe it's set in as a bleak, bleak moral world where even the most idealistic of heroes would cave in to corruption, strife and abuse. To quote director Patrick Yuen:

"Although it is a costume drama, it is designed to reflect the gloomy aspect of the bureaucracy, the social injustices and human frailties which are also evident in present day society."