Recap / Star Trek: The Next Generation S3E7 "The Enemy" 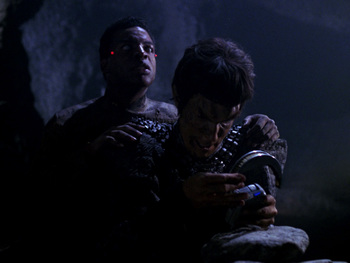 The Enterprise picks up a distress call from inside the Romulan Neutral Zone and tracks the distressed ship as it crash-lands on the inhospitable planet Galorndon Core, just inside Federation space. Riker, La Forge, and Worf beam down to investigate and determine if there are any survivors.

In the midst of heavy electrical storms, which disrupt the tricorders and communicators and allow only limited periods to safely beam in and out, La Forge is separated from the group and falls down a deep hole. Riker and Worf find the wreckage of a small Romulan ship, and a wounded survivor. They beam back to the ship with the Romulan, but due to the storms they are unable to locate La Forge.

Wesley launches a neutrino beacon to the surface, the idea being La Forge's VISOR can pick up the signal, and when he reaches the beacon, he can modulate it to let the ship know where he is. Meanwhile, La Forge manages to fashion some crude spikes to help him climb out of the hole. When he sees the beacon signal, however, he's knocked out by another Romulan.

Back on the ship, the Romulan is dying, and the only way to save him is through a donation of healthy genetic material. The only compatible donor is Worf, who refuses to do so in light of the Romulans having killed his parents on Khitomer; the Romulan, in turn, states he'd rather die than have "Klingon filth" in his blood anyway. Meanwhile, Captain Picard makes contact with a Romulan commander, Tomalak, who insists the crashed ship was a one-man scout craft. Picard agrees to rendezvous in the Neutral Zone in six hours to return the Romulan officer.

On the surface, La Forge wakes up to find himself held at disruptor-point by Centurion Bochra (who refuses to give his name at first, leaving Geordi to refer to him as "Commodore"). Bochra is reluctant to trust that Geordi has a way off the planet, but as the two are suffering debilitating effects from the planet's electromagnetic radiation, they agree to work together. But, just as they set out for the beacon, Geordi's VISOR goes out, leaving him blind. It still works, but his own neural pathways are no longer processing the input. Bochra gets the idea of using La Forge's tricorder and VISOR together to make a "neutrino detector," and Geordi directs him on how to link the two.

Back on the ship, tensions increase as Tomalak has realized the Enterprise is still at Galorndon Core; he crosses the Neutral Zone to intercept them. Picard asks Worf once more to volunteer to help save the Romulan's life, hoping to avoid a major political incident, but when Worf respectfully refuses, Picard drops the matter. As it turns out, though, the Romulan has just died.

Tomalak's Warbird arrives, and he gives Picard one last chance to return his officer. Picard is forced to concede that he has died, and Tomalak orders his ship's weapons powered up. At that moment, the neutrino beacon begins modulating. The Enterprise is able to detect another life form with La Forge at the beacon, and Picard realizes what must have happened. To transport them up, however, they have to lower their shields, leaving them vulnerable to the Warbird.

Picard hails Tomalak again, and although the Romulan commander won't answer, Picard continues anyway—they've found an apparent second survivor of the "one-man" scout craft, and they're going to lower their shields to beam them up to the bridge, keeping the channel open. Picard acknowledges that he will be leaving himself open to Tomalak's attack, and that he is extending his trust to his foe (along with a reminder of the consequences should the Romulans violate the cease-fire with the Federation). With no acknowledgement from Tomalak, they proceed, and La Forge and Bochra materialize. At that point Tomalak chimes in. Bochra insists he has not given any information, but that it was La Forge who saved his life. Picard has La Forge (and Worf) escort Bochra to the transporter room so he can beam to the Warbird, and the Enterprise peacefully escorts the Warbird back to the Romulan side of the Zone.

Tropes featured in "The Enemy":