Recap / Star Trek: The Next Generation S3E8 "The Price" 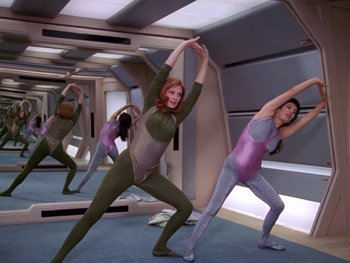 After a hard day's counselling, Troi prepares to tuck into some space mail from her mother. To ease the pain, she decides to have a "real" sundae, but the computer won't let her. Before she can finish this fight, she's called away to Ten Forward, where a formal reception is taking place. The Enterprise has arrived at the planet Barzan II, a resource-poor world that has just struck gold: in orbit of the planet is a stable wormhole, which leads all the way to the Gamma Quadrant. Premier Bhavani, the leader of the planetary government, tells the assembled parties that the wormhole could be theirs—for the right price, of course.

Three parties are interested in the wormhole: the Federation, the Caldonians, and the Chrysalians, the latter of whom are represented by the suave Devinoni Ral, a mercenary human negotiator. Troi seems quite taken with Ral, and the two agree to spend some "informal" time together later. Just as formal negotiations begin than the Ferengi crash the conference. Their leader, DaiMon Goss, wastes no time taking the Federation negotiator out of commission, forcing Riker to take over.

During their date, Ral and Troi quickly develop an attachment. Troi confides in Doctor Crusher that she may be falling in love. Crusher admits that she fell in love at first sight, but the relationship lasted only a week.

The following day, Data and La Forge take a shuttlecraft to travel through and analyze the wormhole. Not trusting to Federation to be forthcoming with their findings, the Ferengi insist on sending their own shuttle containing Goss's minions, Arridor and Kol. The negotiations continue. Riker holds his own as a negotiator and presents a persuasive offer to Bhavani bolstered by the Federation's massive resources. However, Ral argues that the Federation's size and importance make it a dangerous ally, as the Barzanians risk getting drawn in their various conflicts with other superpowers. Later, Ral manages to convince the Caldonian representative to withdraw their bid and strike a deal with the Chrysalians.

Ral is on a hot streak and continues seeing Troi. After they consummate their relationship, he admits that he is one-quarter Betazoid and empathic, like her. She accuses him of using his abilities in an underhanded manner to gain an advantage over his adversaries. He points out that she must uses her abilities to get her ship out of jams all the time, leaving her without a retort. Ral asks Troi to keep his abilities a secret, but the pair separate without coming to terms.

Back in the Alpha Quadrant, Riker is trying his best to hold the Federation bid together, when Goss suddenly goes apeshit and opens fire on the wormhole; he can't directly destroy it, but could easily hit Data and La Forge's shuttle as it returns. Riker leaves to deal with the situation, leaving Ral and Bhavani alone together. Picard and Riker fruitlessly try to talk Goss down, to no avail. At that point, Ral walks onto the bridge and announces that the Chrysalians have just been named the winners of the bidding process. He then offers Goss and the Ferengi Alliance free use of the wormhole, which Goss happily accepts. However, Troi reads the thoughts of both Ral and Goss and realizes that the entire thing has been a set-up. Ral and Goss were in cahoots from the start, in order to persuade Bhavani that the Federation would not be able to protect the wormhole.

The mood of the two cohorts is further deflated when the Enterprise shuttlepod returns through the wormhole, and La Forge informs everyone that the wormhole doesn't work as advertised. The Chrysalians, Ferengi and (presumably) the Caldonians must now all reconcile that they've just partnered up on a worthless deal. All told, the Federation definitely seems to have gotten the better of the whole mess. Who knows, maybe one day they'll find another wormhole to the Gamma Quadrant and won't even need to pay for it?

Before leaving the Enterprise Ral to answer for his actions, Ral speaks to Troi one last time, admitting that he does have genuine feelings for her, and asks her to run away with him. Unfortunately however, Troi consigns him to the Friend Zone and says that she wouldn't want to be a full-time counsellor for just one patient.

"The Price" provides examples of: