Film / Samson vs. the Vampire Women 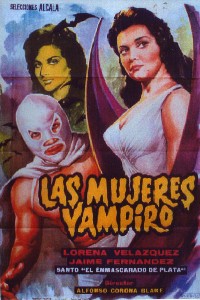 The (first) one where El Santo wrestles vampires.
Advertisement:

The vampire women in Mexico have awakened from their sleep, commanded by their master, The Evil One, to find him a bride. They choose as their target the beautiful daughter (Duval) of a local professor (Augusto Benedico). To rescue his daughter, the professor calls El Santo, a silver-masked wrestler, for great justice. But even El Santo may have trouble with these vampires; their mooks act like thugs and know Kung Fu.

Samson vs. the Vampire Women has examples of: