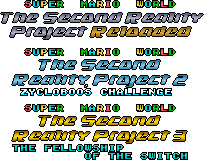 The Second Reality Project is a series of ROM hacks of Super Mario World by FPI. The games feature Mario's adventures in Another Dimension.

The series begins with Mario learning that Bowser had discovered a new power source and is using the resources to construct an invasion fleet of airships in order to strike the Mushroom Kingdom. Eventually, Mario discovers the Second Reality and must put a stop to Bowser's plot. The second game concerns Mario's unexpected return to the Second Reality and a new foe named Zycloboo. The upcoming conclusion to the trilogy will involve a quest to destroy the Power Switch.

After the release of the second game, FPI created The Second Reality Project Reloaded, a remake of the first game with improved graphics and a more original and coherent plot. Another ROM hack by FPI, a parody of bad hacks called Chaos CompleXX, is loosely connected to the plot of The Second Reality Project via Retcon in Reloaded. A "reloaded" version of the second game was released in Summer 2014 and can be found here

You can find the games as .ips patches on either ROM hack archive SMW Central

Tropes that apply to the first game:

Tropes that apply to the second game: