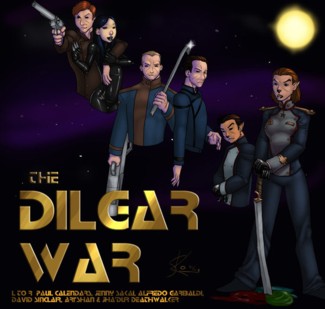 of Babylon 5's most neglected part of its Back Story; the war against the Dilgar that established Earth Alliance as a major power in the galaxy.

The story, initially as told by Warmaster Jha'Dur - aka Deathwalker - to the Minbari during the Earth-Minbari War, tells of her brother Sha'Dur discovering that their world's sun was going to nova in 15 years. Although their immediate superiors scoff, the Dilgar military takes the warning seriously and recruits the siblings for a solution. Deciding that going public would be equally devastating with the probable mass panic and asking for help by neighboring worlds with an evacuation would mean being ruthlessly exploited, the Dilgar military decides to find a new home and secure it by force by absolutely any means necessary.

Ten years, Jha'Dur and Sha'Dur have become senior officers as we follow their and comrades' bloody conquests against the League of Non-Aligned Worlds. Driven by the threat of their species' pending extinction, the Dilgar, already known as ruthlessly militaristic and species-centric, become horrifically brutal in their campaigns with Jha'Dur becoming both the most skilled and most depraved of the commanders both on the battlefield and in her sadistic laboratories respectively. Not only do she and her brother inflict terrible genocidal havoc, but they have to deal with internal political rivals even as a foster sibling, Ari'shan, becomes the supreme Dilgar Ace Pilot, albeit with a code of honor and a strong conscience for his species.

Parallel to this, we follow the desperate efforts of the various League members trying to defend themselves, crippled by their own disunity. Furthermore, help from the major space powers proves impossible: the Centauri would enslave them all again, the Narns prefer to keep out of the Dilgar's way to focus their operations against the Centauri and the Minbari talk to no one, period. Regardless, the genocidal Dilgar steamroller presses relentlessly ahead, crushing all hope and life in its path.

However, there is one rising hope from a newcomer into the galactic stage, Earth. Realizing the growing threat of the Dilgar, tentative steps are taken to understand the full situation and the story follows various Terran heroes as they are drawn into the conflict. These include Sgt. Alfredo Garibaldi and his trooper comrades, originally of the Persephone, a heavy cruiser which during a scouting mission under the cover of a humanitarian gesture fell in heroic defense of the innocent victims of Dilgar brutality. There is also the crew of the freighter, Space Race who find themselves in the thick of the resistance with their secret agent friend, Jenny Sakai. Together, this ragtag group of soldiers and civilians stranded on a Dilgar controlled world strike the first unofficial Earth blow on the ground against the enemy, including Deathwalker herself, and escape with invaluable intelligence in an adventure that would be the first of many for them all. The opening skirmishes are not just in the frontier as Jenny fights subtler threats like hunting a deadly Dilgar spy on Earth with the help of Francis O'Leary, teenage hacker turned intelligence communications analyst extraordinaire.

All this leads to when Earth finally decides to take a stand and joins the fight for real...

Has a For Want of a Nail-style AU sequel in A Fighting Chance, and the author also wrote another Original Flavor story, The Last Star.