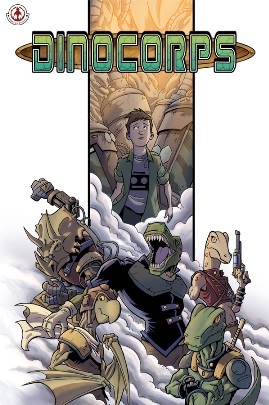 Carl and the eponymous Dinocorps.
Advertisement:

Dinocorps is a comic book published by AAM-Markosia and written by Andy Briggs and Steve Horvath, with Bob Molesworth as the illustrator.

While working on a science project for high school, Carl Vega discovers a cave buried beneath a mine near his home town. As he investigates the surroundings, he finds a series of strange devices and cryogenic chambers, which all contain talking combat dinosaurs who used to be part of an ancient civilization that has been extinct for millions of years.

Carl decides to keep the dinosaurs, known as the Dinocorps, hidden from sight, unaware that the nefarious Saurons and their leader, Jarek, have also awaken.

Once Jarek and the Saurons make their presence known, the Dinocorps realizes they plan on deploying a weapon that will cause The End of the World as We Know It. It's up to Carl and his new reptilian friends to stop Jarek before the human race is driven to extinction.