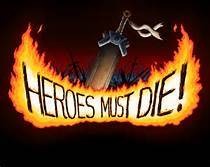 Heroes Must Die is a free-to-play Turn Based Action RPG released by Heroic Games for PC on July 15, 2016.
Advertisement:

It follows a young hero forced to work for evil overlord Lord Murder. The game has a turn based strategy combat system where you dodge enemy attacks then attack the enemies. He is called upon to deal with a revolution with the help of his Co Dragon Grim. Along the way he fights masked bandits, mad bombers, magical twins, and Dragons.

No relation to Hero Must Die.