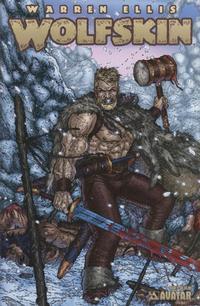 When all three of the conditions are fulfilled, you get Wolfskin.

By Ellis standards, it's a fairly straight forward Barbarian comic, chronicling the adventures of a Nortish warrior, known only as "Wolfskin". He wanders the earth, doing barbarian stuff like mercenary work, but mostly he kills people to appease his "murder god" (yes, you read that right) "Wrod". Althugh Wolfskin has a code of honor, (he is quite protective of children, for example) he is also 100% more barbaric than a guy like Conan ever was; for example, the first issue has Wolfskin practice ritual cannibalism.