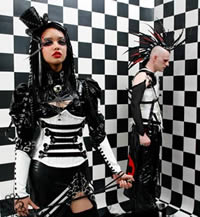 On the left, DestroyX. On the right, ZooG.
Advertisement:

One of Australia's most well-known industrial bands, Angelspit is a unique industrial act that have been destroying sound and music alike for years. The group began in the early 2000's, when Karl Learmont and Amelia Tan met on an online zine forum. Together, they worked on Amelia's zine distro, Vox Populis, eventually turning it into the largest zine distro in the Southern Hemisphere. From there, they started making their own zines, and finally started making music. The band's name comes from the Sonic Youth song 'Orange Rolls, Angel's Spit'- both are fans of the band. Having created the stage names 'ZooG' and 'DestroyX' for themselves, Angelspit began to draw attention through their unconventional style of music, their 'we don't give a fuck what you think' attitude, and their awesome mode of dress. They released their first EP, Nurse Grenade in 2004, and continued on, releasing their first album, Krankhaus, in 2006. Having closed the distro to focus on their music, they then released a music video for their song 'Vena Cava' that pretty much defined their schtick.

Their music is glitchy, distorted and nothing like conventional music whatsoever, and it's a huge part of why they are so unique. Their lyrics, however, range from endorsing cannibalism, murder, torture and all that wonderful stuff to railing against stereotypes, traditions, modern society and the like. Their music videos, in contrast, generally have nothing to do with the songs but will give you nightmares (and always have amazing outfits in them). In another contrast, the band themselves are incredibly lovely people both online and IRL. In 2011, they added three new members: Valerie Gentile (formerly of The Cruxshadows and Black Tape For a Blue Girl) on guitar, Matt James (replacing Chris Kling, the original drummer) on drums, and The Liar as their video manipulator. DestroyX left the band in 2014, leaving ZooG as the primary vocalist. She has since released two E Ps, Carbon Black and Queen of Risk, under the name Amelia Arsenic.