Music / Paul Revere and the Raiders 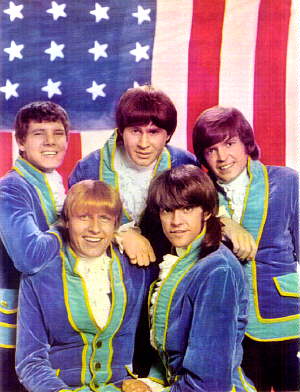 Paul Revere and the Raiders were a Rock & Roll/Garage Rock band based out of Los Angeles via Portland, Oregon via Caldwell, Idaho (outside of Boise). Led by their founder and namesake, Paul Revere Dick (January 7, 1938 - October 4, 2014), and featuring lead singer Mark Lindsay. Starting out as a standard Rock & Roll dance band in The '50s, they finally found success in the middle of The '60s playing hard-edged Garage Rock influenced by The Rolling Stones and The Yardbirds. They were viewed as part of the American response to The British Invasion, with their name and their stage uniforms invoking The American Revolution. They also became household names by starring in the daily Dick Clark-produced pop music TV show Where the Action Is.

They had five Top 10 hits in America between 1965 and 1967, before their particular style of good-time rock fell out of favor at the end of the decade. Shortening their name to just "Raiders", they scored a surprise comeback hit in 1971 with "Indian Reservation (The Lament of the Cherokee Reservation Indian)", which hit #1 and achieved Platinum status. In the middle of all that, singer Mark Lindsay launched a solo career alongside his work with the band, scoring a Top 10 hit of his own with "Arizona". Also guitarist Freddy Weller had a concurrent career as a Country Music singer, which he continued even after he left the group.

Lindsay formally left the group in 1975, but Revere kept it going as a nostalgia act.