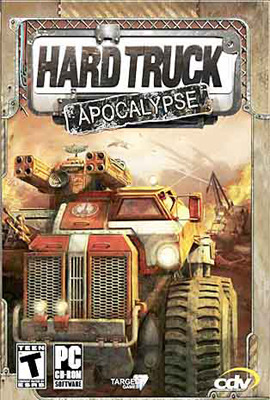 In an unspecified time in human history, a catastrophic crash destroyed much of the Earth. The crash of an unidentified object condemned the planet's atmosphere to become poisonous forever, killing off those who inhaled it. Species began to die out (save for plants, which continued to thrive on), until someone invented special masks which would allow humans to breathe again. Ever since then, humanity continued to live on. The masks, due to their rather eerie plain looks, are mostly identical to each other. This led to humanity being much more united. They still formed separate clans though, with them making a living via primitive ways such as farming, trading, manufacturing, repairing old scraps, etc. Perhaps the most desired job is being a trucker, as you get to travel the world, meet new people, hang out in new towns to trade and take jobs. However, this new lifestyle never changed the fact that Humans Are Bastards, and many still choose to make a living by killing and stealing or wrecking havoc in the name of fun.

13 August 2234, its your birthday today. Your (foster) father, Peter, thinks that you're old enough to be a trucker. He gives you his truck as a birthday present and sets you off on your first adventure alone into the dangerous world, which is just a short trip to a neighbouring town and back. However, your birthday couldn't be any more bleak, as upon your return you find your hometown razed to the ground and Peter dying from his injuries. In his last moments, Peter reminds you that you're just an adopted son and that your biological father, famous explorer, close friend, inventor of the masks and somewhat messianic figure Ivan Go, might still be alive. He tells you to meet up with one of Ivan's close associates, Ben Throttle, who may be able to help you find your long lost father. You also develop a thirst for revenge and desire to get back on whoever was responsible for the destruction of your hometown and the death of Peter. From here on, you set off on a long journey to avenge Peter, find your biological father, discover your true self and ultimately the truth behind the calamity that has since turned the Earth into a Death World.

Hard Truck Apocalypse (also known as Ex Machina in Russia) is a unique blend of metal-crunching Vehicular Combat and story-driven Role-Playing Game developed by Targem Games (who later made the Carmageddon-esque Armageddon Riders / Clutch and the sequel to the Codemasters classic 1nsane) and published by Buka Entertainment, released in Russia on 8 December 2005. The game plays like your standard RPG: the player travels around from town to town while gaining coins from jobs and selling items which can be used to by upgrades and groceries and regularly encounter monsters (or in this case, bandits in weaponized cars). The game was a huge hit in Russia, being awarded "Best Game Design" by the Russian Game Developers Conference and some others by the press. It was exported to North America on 19 June 2006, though the reception was entirely the opposite, with big name gaming sites like Gamespot and IGN giving it bad ratings due to unimaginative missions, awkward controls, bad voice acting and repetition.

Nevertheless, a standalone expansion Rise of Clans (Meridian 113) was made. This time, it shifted the focus from a young boy in search of his father in post-apocalyptic Europe to a lone vagrant in the dystopian wastelands of North America who is on a quest to find the mythical city of Edmonton. Probably due to Hard Truck Apocalypse's unsuccessful outing in America, this expansion was a case of No Export for You until the game's Steam release in 2014.