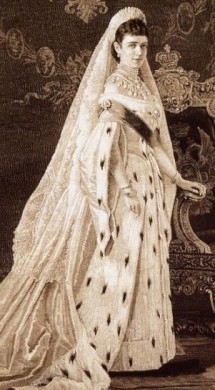 Even in the days of the czar, Russian court dress was distinctive.
"Gdye mozhna koopit blue jeans?"
— Flight of the Old Dog, by Dale Brown.
Advertisement:

During the Cold War, the Soviet Union didn't really have much access to Western fashion, unless you were one of the nomenklatura or otherwise well connected. This is why Sergei in the novel is surprised to see a woman wearing a denim jacket and jeans (he asks "Where did you get those blue jeans?"), gladly trading his coat for it. Note, though, that this is a fairly overblown notion — while for a time in The '60s and early Seventies the authorities tried to fight this "cowtowing before the West" (including cutting too-narrow trousers), by the mid-Seventies they finally relented and even started the domestic production of the most coveted items such as the blue jeans, as well as importing knock-off ones from Turkey and India. Still it didn't have much effect, as not only was the quality often atrocious, but the mere fact that they were domestically produced made them not "true" and thus not worth it.

Since the collapse though, Russian women (and men) have grabbed Western fashions voraciously. Their upper and upper-middle classes are currently often found wearing several salaries on their person at once. In extreme cases, a driver's currently worn outfit can be worth more than his car. The vast majority of Russians, however, dress very similarly to the average person in the West.

This article, however, will focus on the items of clothing that are specifically Russian, or very common there. Note, that most 'traditional' items were outdated in USSR times or even earlier, and even in USSR times Russian fashion was heavily westernised.