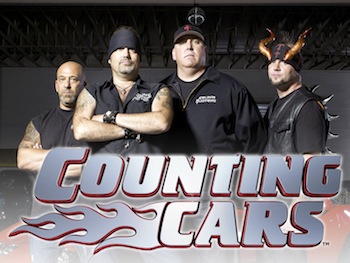 Counting Cars is a show on The History Channel.

After several appearances on Pawn Stars, Danny "The Count" Koker was given his own show focusing on his shop, Count's Kustoms, and his crew of employees as they buy, restore, customize, and sell various classic cars and motorcycles.

A major part of the show is how Danny, while cruising around Vegas with Kevin, will go out of his way to chase down every classic car or bike he sees on the road with the intent of making an offer on the vehicle, sometimes following people for miles just for the chance to talk to them. He's variously met with either enthusiasm from fellow car fanatics or suspicion from those who don't like being followed. While he doesn't always make a deal, he always makes an offer, and if that fails leaves his business card, hopefully securing a new customer for the shop. Whenever possible, he'll take the car for a test drive, leaving Kevin as collateral (much to Kevin's annoyance).

Other aspects of the show include Danny's temptation to keep the vehicles he buys instead of selling them for profit; it's mentioned his personal collection is comprised of over fifty automobiles which are on display in the shop. Also touched upon is Danny's relationship with various celebrities and the work he does for them.

While everyone on the show clearly loves cars and knows what they're doing, it cannot be denied that much of the show is painfully staged for the camera in an attempt to show cool stuff and hijinks that will also pad out the running time. A good example is the time an extremely attractive woman was standing by their car carrier rig, ostensibly "admiring" it. She looks like she just got out of the make-up chair, shows no surprise at cameras recording her, and no reason whatsoever is given for her walking up to a car carrier parked on a street to "admire" it. Watch the sequence sometime. In a word, ouch.