Series / The Next Food Network Star 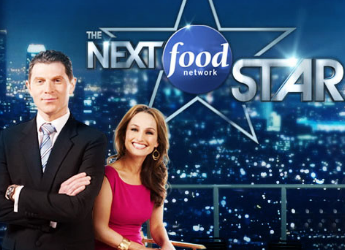 A reality show launched by the Food Network (who else?) in 2005, The Next Food Network Star pits a number of potential celebrity chefs against each other in a variety of challenges to test their skill at cooking and interacting with people— both in person and through the camera. In the first two seasons, eight entrants were considered (with one team of two appearing in the first season, for a total of nine participants), but the number of entrants has since been increased to twelve and then to fifteen for season 8, then cut back to twelve again for seasons 9 and 10. Contestants are eliminated every week until two or three finalists remain, who go on to star in a pilot that is screened during the season finale. The winner's pilot (or something similar to it) goes on to become an actual show on the network, although the staying power of this show and its star has varied greatly from season to season.
Advertisement:

The format for judging and selecting a winner has changed over the years, as viewers were given the chance to vote for the winner in earlier seasons, but they are now selected exclusively by the panel of judges. Bob Tuschman and Susie Fogelson, two Food Network executives, have been the core members of the judging panel since the beginning of its use. In the third season, a different guest judge would appear every week to assist them. Since the fourth season, the judging panel has consistently been Tuschman, Fogelson, and Bobby Flay, a chef who stars in Throwdown and Iron Chef America, among other shows. Giada De Laurentiis was added to the panel for the eighth season, as was Alton Brown.

For seasons 1-7, the challenges in the show serve to both test and develop abilities that will be most useful for the contestant who will ultimately appear on their own show. A "Camera Challenge" is included every week, and requires each contestant to describe their food on-camera in an engaging way, within a set period of time. Usually, the particpants have also prepared the food they are presenting, so their dish is also judged as part of this challenge. This segment is the lead-in to the "Star Challenge" which is a more intense challenge that requires the contestants to work under pressure. Examples of these challenges include creating a dish with a specific theme for VIPs, preparing multiple dishes in a limited time (sometimes for the purpose of catering an event with hundreds of guests) or participating in some other test of skill inspired by another Food Network show.

The format was Retooled and reversed for season 8. Fifteen contestants were split into three teams of five, lead by a mentor. Each week, the contestants were given the main "Star Challenge" which tested their cooking skills and ability to work under pressure. These challenges may be inspired by other Food Network shows, or the theme of the week. Each week, the bottom contestants were given a chance to redeem themselves through a "Producer's Challenge", which usually had something to do with that week's holiday theme (such as Mother's Day or Memorial Day). The "Producer's Challenge" tested the finalist's ability cook (again), but more importantly the ability to sell the dish in a recorded one minute clip. Whoever was the least successful would then be eliminated.

For Season 9 onward, the format was once again revamped, with Bobby, Giada and Alton pulling double duty as mentors and (in most episodes) judges, occasionally joined in the latter role by Tuschman and Fogelson. The episodes subjected the contestants to a wide variety of challenges, many of them based on existing Food Network shows; generally, there would be a "dry run" or preparation phase in the first part of the episode, followed by the actual challenge, designed to test various potential qualities of the prospective star as both a TV personality and cook.

Several well-established stars of other Food Network shows have appeared on The Next Food Network Star, not only to serve as guest judges (as previously mentioned), but also to present the star challenges. This includes Rachael Ray; one of her appearances was during season four, where she told the contestants that their next challenge would be a live demonstration on her show. Also, in the season five finale, Alton Brown (of Good Eats fame) actually directed and helped produce the pilots for both of the finalists.

Starting in Season Nine, Robert Irvine hosts an online show Star Salvation that allows eliminated contestants a chance back on the show as they battle each other through a series of challenges. For Season 10, the hosts are Iron Chef America's Geoffrey Zakarian and Season 9 winner Damaris Phillips.

The show was renamed to simply "Food Network Star" from season 7 onwards.

The winners of The Next Food Network Star from each season are:

The Next Food Network Star provides examples of: