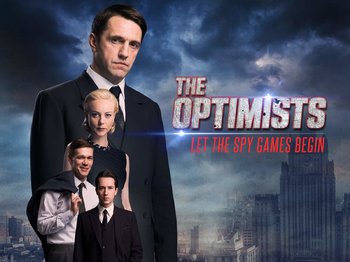 The Optimists is a 2017 television series from Russia, which ran for 13 episodes.

The series is set in Moscow in 1960. It centers around the "Special Advisory Group" of the Ministry of Foreign Affairs. They're low-level spies, essentially, in a department that exists to help Russian diplomats familiarize themselves with Western customs in order to gather intelligence. In one scene the junior staffers are practicing golf, after an incident in which a Russian diplomat had to decline an invitation to go golfing with a U.S. Senator.

The protagonists are Ruta Blaumaine and her new boss, Grigory Birukov. Ruta is Estonian-born but apparently an American citizen, who fled to Russia during the Red Scare because she's a communist. Ruta was in charge of the Special Advisory Group, but in the first episode Grigory arrives as her new boss. Grigory is a recent widower, his wife having died in childbirth. His posting at the SAG is a demotion, after he got in trouble for assaulting a West German communist. (Said communist served in the Wehrmacht when it was besieging Leningrad.) He's dating Galina Volina, a broadcaster for Russian TV. Ruta and Grigory clash a lot over the direction in which to take the SAG.

Among the junior staffers at the agency are: Andrey Muratov, who was forced to denounce his own White Russian parents when they were locked into the gulag; Leonid Korneyev, who grew up in an orphanage with Spanish Civil War orphans; and Arkady Golub, a bespectacled nerd-type who specializes in Asian languages.

Ruta is having an affair with Nikolai Chernykh, an old friend of Grigory's who also happens to be the KGB man in the ministry. Ruta's affair is an affair because she is married to Col. Alexei Bylov of the Russian Air Force. Col. Bylov kicks off the story in the first episode when he gives the order to shoot down an American spy plane

. After American pilot Francis Gary Powers is captured alive, Grigory realizes the Soviets have a prime opportunity to embarrass the Americans ahead of a planned summit in Paris.

A sequel series, The Optimists: A Cuban Affair, ran in 2020.