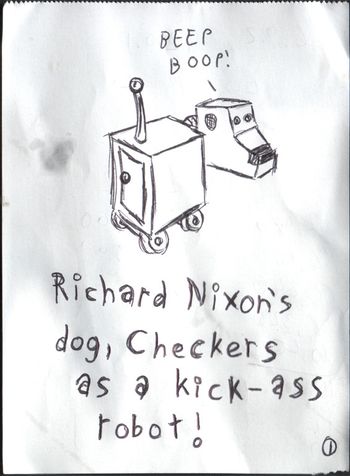 Working Doodles' first ever submission. The beginnning of it all.

Usually updated on a Monday, Wednesday and Friday, Working Doodles

is one man's attempt at letting what's in his head out to the world. Drawn with regular ball-point pen on thermal till roll, it's a mostly single panel gag-a-day style webcomic designed around the concept of that piece of paper you find when you're bored at work, school or wherever that you just decide to doodle on.

Sub-titled, Tales from the Till Roll and created in July 2015 by John "John D Anims" Davidson, there's a few ongoing themes and mini series throughout the strip. Animals appear regularly and a series of ongoing drunk superheroes appear sporadically throughout. The subject matter, characters, settings, styles and everything about it can drastically change from page to page.

It's based primeraly on Blogspot