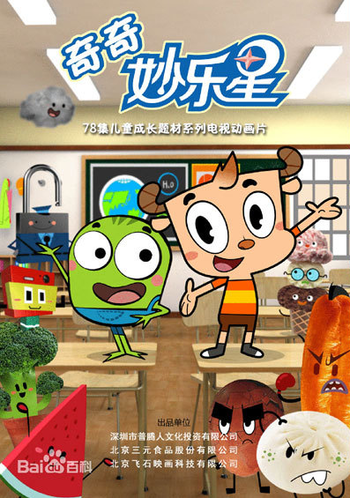 Miracle Star is a Chinese animated series made to promote a Chinese brand of goat milk also called Miracle Star, which is manufactured by the company Sanyuan Foods. It stars an anthropomorphic goat boy named Kiki, who owns a talking pet frog named Gua Gua.

The episodes are notorious for being a blatant bootleg of The Amazing World of Gumball, right down to it copying its character designs, animation style, and even several scenes from the show. This has not gone unnoticed by the crew behind Gumball, who eventually made an episode called "The Copycats" to serve as their unabashed Take That! towards Miracle Star.

Compare The Legend of Lucky Pie, a similar Chinese knock-off of Adventure Time (albeit Patreon-funded by its crew and not meant to promote any product like this show).