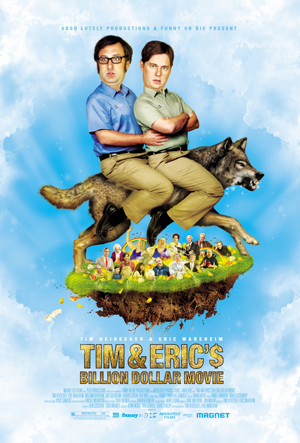 "C'mon! Just see the film, it's not the end of the world. You go see see, you check it out, there's a coup — a bunch of good laughs in it, and, uh, if you go see it and see the whole movie and stay to the very end, you get a $10 gift certificate to Walden Books."
— Tim
Advertisement:

A 2012 comedy film from Tim Heidecker and Eric Wareheim, the stars and creators of Tom Goes to the Mayor and Tim and Eric Awesome Show, Great Job!. The film stars the titular duo, playing twisted versions of themselves, as two filmmakers who are given a record setting 1 billion dollar budget by the Schlaaang Corporation to make a movie.

After wasting the money on superfluous things (i.e. a $500,000 personal trainer, real diamonds, paying Johnny Depp's salary to a Johnny Depp impersonator, etc.) and signing a bad contract, they find themselves owing the corporation the money. After seeing an advertisement with Damian Weebs (Will Ferrell) looking for somebody to run his mall, with the promise they will make a billion dollars, Tim and Eric decide to take the job. While trying to refurbish the mall, they must deal with vagrants (ex. a man-child named Taquito), bizarre stores (ex. Reggie's Used Toilet Paper Discount Warehouse), and a man-eating wolf that stalks the food court.

Also features John C. Reilly, Zach Galifianakis, Ray Wise, Jeff Goldblum, Will Forte and a host of others, most of whom appeared on the duo's TV show.

This goof and a spoof contains examples of: