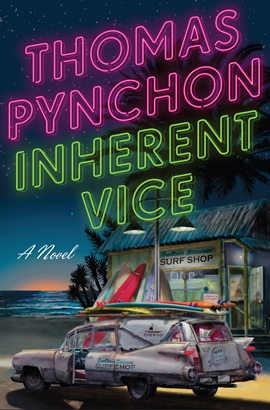 Inherent Vice is a 2009 novel by Thomas Pynchon. Ostensibly it follows Doc Sportello, a private investigator in California trying to find a missing real estate developer on the behest of his ex-girlfriend but really the work explores a much wider set of themes including the sex, drugs and rock and roll lifestyle of the ’60s and its clashes with forces of law and order with a neo-noir sensibility.

It gets even more confusing from there.note The plot summary on Wikipedia is currently accompanied by the warning “This section may be confusing or unclear to readers.” This is less a fault of the summary itself than it is of the material being summarised. Despite this, Inherent Vice is one of Pynchon’s less confusing novels—after The Crying of Lot 49 and Vineland, it may be his most accessible work for newcomers.

A film adaptation by Paul Thomas Anderson was released in 2014, to critical acclaim.