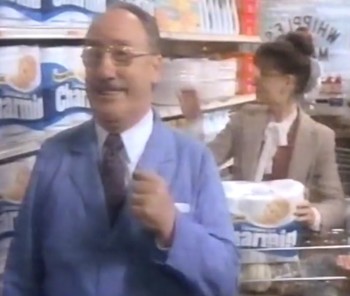 Mr. George Whipple is a fictional supermarket manager featured in television commercials and print advertisements that ran in the United States and Canada from the 1960s to the 1980s for Charmin toilet paper, a product of Procter & Gamble, before being replaced by the Charmin Bear. In these commercials, Mr. Whipple would always chastise customers (usually women) for squeezing the Charmin despite the fact he does so too. There were more than 500 commercials made.

Mr. Whipple was played by Dick Wilson, who also appeared on the TV show Bewitched.

The commercials inspired a line in "Weird Al" Yankovic's song "Dare to Be Stupid": "You better squeeze all the Charmin you can / When Mr. Whipple's not around."

Mr. Whipple give examples of: