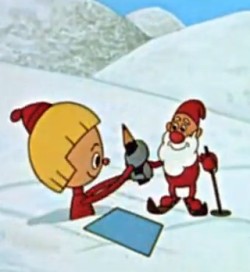 Draw Anything. Solve Everything.
Zaczarowany Ołówek (The Enchanted Pencil) is a Polish children's series of animated shorts, produced in 1964-1977. The protagonist is a young boy who likes to draw, which surprisingly comes in handy when it comes to solving problems—in each episode, a friendly gnome appears and gives him the eponymous enchanted pencil, which can be used to literally draw things into existence.
Advertisement:

From episode 27 onwards, the series featured a story arc about finding and saving a boy marooned an island.