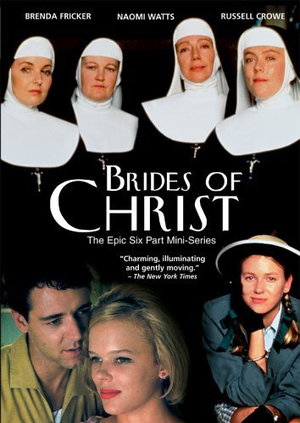 That's the way it was with these women. When you called into question everything they stood for, when you spat, complained and argued, they returned love. I was surrounded by strong, luminous women intent on doing good.
— Catherine
Advertisement:

Brides of Christ is a 1991 ABC Australian miniseries set in a convent and a Catholic girls boarding school in Sydney in The '60s. It begins with two young women, Diane and Veronica, entering the convent of Santo Spirito and later becoming Sisters Catherine and Paul. Many of the issues of the time are brought up like Vatican II, contraception, The Vietnam War and teenage pregnancy.

The series is based on an Ensemble Cast, with the six of the main characters each having an episode from their point of view.