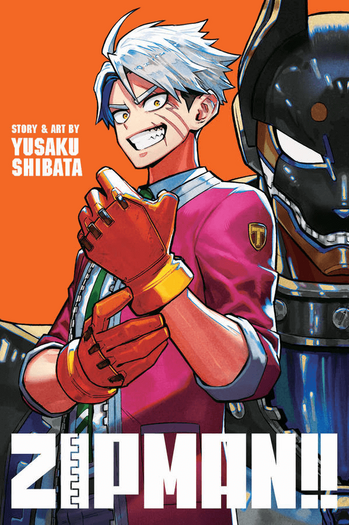 Kaname Tatara has loved the Toku show Jackman for as long as he can remember. He has trained tirelessly every day in hopes of taking up the role himself. Unfortunately for him, his devilish appearance and tendency to mumble when he's nervous gets him stuck as the monster instead. As if that wasn't enough, he constantly lives in the shadow of his younger twin brother Koshiro, a mechanical wizard who made massive advancements in robotics and engineering. No matter how hard he tried, he was never able to one-up his brother before Koshiro died suddenly when they both turned 17.

Frustrated, Kaname only has his Childhood Friend Cheena to turn to, but even then it's clear that he could never make her smile the way Koshiro could. Things take a sudden turn when Kaname receives texts from Koshiro seemingly from beyond the grave as a giant robot lumbers towards Tokyo Tower. Then a truck pulls up as Koshiro tells him to put on a suit of Powered Armor to take the fight to the robot. Although he's unsure of what's going on, Kaname willingly puts it on and manages to beat back the robot with Jackman's signature Rocket Punch. As a crowd of onlookers roars with applause, Koshiro reveals that somehow, his consciousness is inside the suit. Thus begins their adventures as Jackman as they unravel the mystery behind Koshiro's predicament.

Zipman!! is a short-lived shonen manga written and drawn by Yusaku Shibata for Weekly Shonen Jump. It was serialized from December 2019 to April 2020 for 17 chapters.