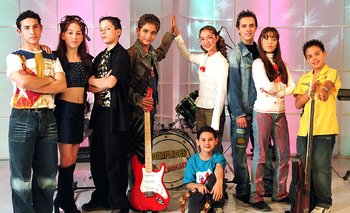 Cómplices Al Rescate (English title: Accomplices to the Rescue) is a Mexican children's-teen telenovela produced by Rosy Ocampo for Televisa. It premiered on January 7, 2002 and ended on July 12, 2002.

This is the story of the twins Mariana Cantú and Silvana del Valle Ontiveros. Silvana is kidnapped as a newborn by Regina, who lies that the girl is her daughter and the result of her relationship with Rolando, a rich man. Silvana becomes a spoiled girl, while Mariana, who is raised by her biological mother, becomes a humble girl.

After 12 years, the twins finally meet by sheer chance. After the initial scare, Silvana asks Mariana to switch places with her for a day so that she can audition as Silvana and get a part in a famous upcoming children's band called "Cómplices al Rescate". The two sisters also try to investigate why they grew up apart, and they also deal with the fact that they like the same boy.

This telenovela is best known for the fact that its leading actress Belinda left the production after chapter 92, being replaced by Daniela Luján.

The soap opera also got a Brazilian Remake adapted by Iris Abravanel, it premiered in August 3, 2015 and ended in December 13, 2016. The Remake was broadcasted on the Brazilian television network known as SBT.

This telenovela has the following tropes:

The Brazilian Remake of Cómplices Al Rescate has the following tropes: