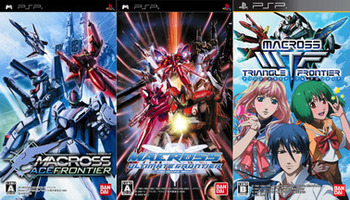 The Macross Frontier Trilogy games is a trilogy of games set in the Macross universe that consists of Ace, Ultimate, and Triangle Frontier. They were developed by Artdink with Bandai Namco being the official publisher for the PlayStation Portable. It uses the game engine used by the various Gundam Battle games. Each game allows the player to play in single player or in multiplayer mode via the PSP's Ad Hoc feature.

The games do not have any story or plot to follow. Instead, players will assume the role of several Original Generation pilots created specifically for the game trilogy as they get involved in all of the Macross series from Macross Zero to Macross II.

Frontier are available for viewing.