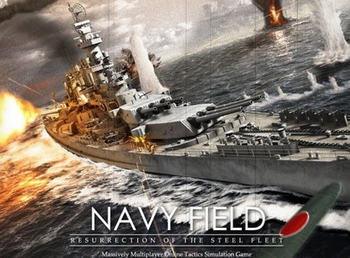 Navyfield is an MMO Naval Tactical Simulator for PC, with a simple premise: take the various warships developed and used during World War 2, let players customise them as they see fit, then unleash them on the open ocean. A player starts with a generic frigate and, as their sailors level, will get access to better ships (destroyers, cruisers, battleships and carriers) and better hardware (cannons, torpedoes, mines, depth charges, scout aircraft, fighters and bombers).
Advertisement:

It launched on 18th August, 2006 and at first only featured the big four naval powers (Germany, Japan, America and the UK); a later update added the French navy, then another added the Soviet navy, and the Italian navy is due who-knows-when.