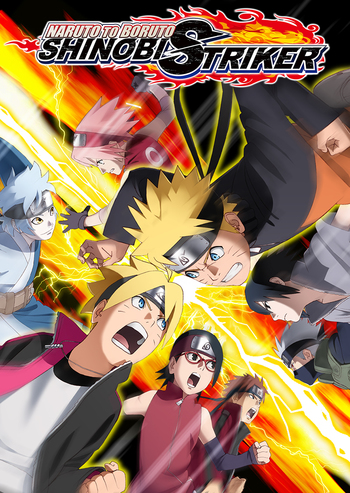 A game created by Soleil entertainment, and somewhat of a follow up to the Naruto: Ultimate Ninja Storm series, but is still its own game entirely, this game is soft MMO style game with a heavy focus on PVP. You can customize your own character, teach them moves from the Naruto franchise, and have them duke it out with other players or against virtual enemies. In addition there is a class system that determines what justu and ninja tools you can equip. The play can switch freely between the classes, but you only have 4 customization slots to freely switch between without having to go and reorganize it in town.

The class system is fairly simple, with 4 classes: Assault which focuses on closer range and has the strongest offensive, with the goal being to wipe out an enemy before they can react and keep pressure on their targets. Ranged which is weaker in both defense and melee but have strong ranged justu and their strong attack can launch a ranged assault, but not as long ranged as their skills, to keep enemies back and keep damage up with the goal of providing damage and support from out of range. Defenders have a decent melee and their skills focus on defensive fighting, such as making walls or slowing enemies in an area, and are basally experts at turtling while still able to trade blows close range. Healers are the last type, and their gimmick is basically horrific offensive prowess in return for giving the vital service of recovering HP for the team, which otherwise doesn't happen in PVP or depends on pickups for PVE, and inflicting status on the enemy in return for not really having any solid offensive options at all.

There is no real "plot" of the game. The story is the hidden leaf village created a virtual reality system that can create whole battlefields and recreate ninja, but only as combatants, and so they've decided to give all the ninja who focus on fighting and getting stronger something to do by making a huge tournament that makes use of the VR system to let them duke it out with little risk to them or each other. There's little else as far as story is concerned. All PVE missions are generated by the system and are basically "What if" scenarios made to help ninja train against all kinds of enemies.

This game has a lot of similarities to Dragon Ball Xenoverse, such as the teacher system and semi-random quest rewards. However, unlike Xenoverse, the focus here is on PVP. You won't be able to max out a character on PVE alone, not easily at least, and the setup is designed for teams of 4. The game does give you plenty of PVE missions that all have different stories, goals, and enemies as well, but they don't give as much EXP as just fighting other players, even if you lose.