Fanfic / Of Sheep and Battle Chicken 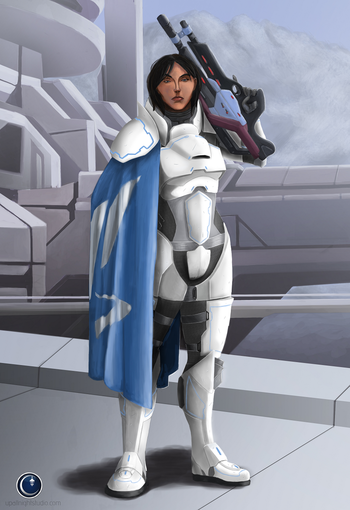 Of Sheep and Battle Chicken

, is a highly divergent AU of Mass Effect 1, set in a far darker variation of the galaxy. At its core, the story revolves around a badly damaged Shepard, who must overcome her own pains and problems in order to try and save the galaxy... even if there are times where the galaxy seems as if it isn't worth saving.

By and large, the story revolves around the Rule of Awesome, with generous side helpings of Grimdark and Realpolitik. While Shepard and the main cast can, and usually do, mow through vanilla mooks, once in a while something surprising will happen. The Awesome comes when the boss fights begin, the fights themselves being both very well written and logical within the expansive boundaries of the AU.

In addition to the original, the first sequel focuses on the immediate aftermath of the Battle of the Citadel, OSABC And Then There Were None

. Particular time is given to Bring Down the Sky, Pinnacle Station, followed by Redemption. As with the first story, those various aspects are greatly expanded. A third story, covering the events of Mass Effect 2, is currently in progress: OSABC II That Which Cannot Die

Beyond those base stories, there is a massive wealth of side information and world building that has been done, delivered in the form of both STG Threat reports (generally reserved for single individuals) or Cerberus Intelligence reports (on governments or groups). All of these stories as a whole are referred to as the Premiseverse.

, though one should search for it.

Of Sheep and Battle Chicken contains examples of...