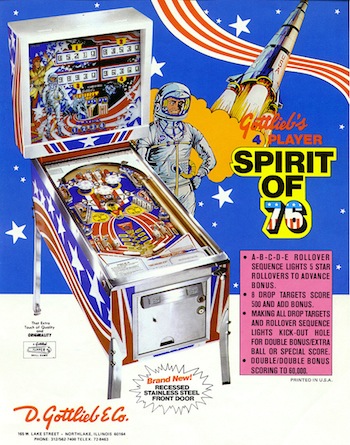 Spirit of 76 is a Physical Pinball Table released by Gottlieb. It was designed by Wayne Neyens and Ed Krynski, illustrated by Gordon Morison, and released at the beginning of 1976 to celebrate the United States Bicentennial. It would eventually become one of Gottlieb's most popular pinball games, with over ten thousand tables manufactured.

Appropriate for a celebration of the 200th birthday of the United States, Spirit of 76 is awash in patriotic fervor, from the red, white, and blue colors; stars and stripes everywhere; and images contrasting America's pioneers and their covered wagons with astronauts and their spaceships. Hitting the "1776" and "1976" drop targets enables double bonuses, with opportunities to stack bonuses and earn specials (free games).

With minor art changes, the game was released in two other variations: Pioneer, a two-player version, and New York, celebrating the end of New York City's ban on pinball machines.

Spirit of 76 was the final pinball from Gottlieb veteran designer Wayne Nevens. Gottlieb gave him the 10,000th machine as a gift, and it is the only pinball machine he has at home.

A digital version of the game is available on Microsoft Pinball Arcade.

Spirit of 76 demonstrates the following tropes: