Music / Having Fun with Elvis on Stage 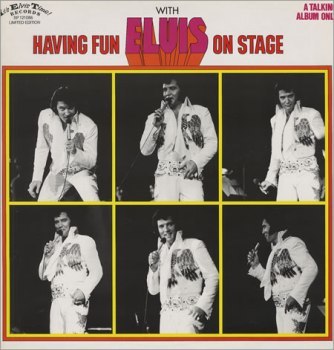 A Talking Album Only!
Advertisement:

Having Fun With Elvis On Stage is the seventh live album by Elvis Presley, released in 1974. It is often considered Elvis' worst record - if not one of the worst of all time. While other concerts show that Elvis could be funny on stage this album is not a proof of that. It's a concert album without any actual music, just Elvis... talking. If that weren't bad enough all of it is cobbled together from different concerts with all context removed, so you have no clue what he's talking about. As a result a lot of "jokes" fall flat or are nothing but repetitive improvised conversations that just go nowhere and are often Cut Short abruptly.

Yet Elvis wasn't the one to blame. The record was a ploy by his manager, Colonel Tom Parker, to make money off him by releasing an album RCA Records had no rights to (although RCA eventually reissued the album anyway; it even made the charts). Elvis himself was both angered and ashamed by the album's release and personally made sure it was withdrawn from the market, making it one of the rarest albums in existence for Elvis collectors (at least in the original release on the Boxcar label; thanks to the RCA version actually making the charts, there are plenty of copies from that release in circulation). Bile Fascination has also attracted many fans of curiosities to this Old Shame; it received the #1 ranking among the albums listed in the 1991 book The Worst Rock n' Roll Records of All Time (edging out Metal Machine Music and Self Portrait).

Understandably it has never been (officially) released on CD, even though RCA did reissue the album (along with every other Elvis LP) in the year or so following Presley's death.

Troping Fun With Elvis On Stage