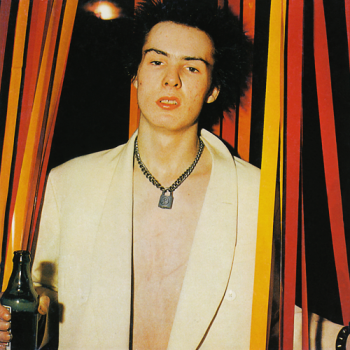 Sid Sings is Sid Vicious's first and only solo album, released posthumously in the same year of his tragic death, 1979. It's predominantly a Live Album, a Greatest Hits Album as well as a Cover Album, with Vicious's renditions of "My Way" and "Something Else" as the best-known hit singles.

While the album sold well due to Sid Vicious's rise in legend after his death it's generally not seen as a well-produced or good record for that matter. Apart from his deliberately bad vocals, there is only one song, "Belsen Was A Gas", where he had a hand in as co-writer. All other tracks are covers, many recorded live in bad sound quality. Many people who bought it seldom played it ever again. Still, Vicious himself is not entirely to blame, seeing this record was hastily cobbled together from whatever tracks the studio had lying around. And for people interested in his songs it is the most essential legacy available.

The cover of "My Way" was later used in Martin Scorsese's Goodfellas.