Music / Live in Australia with the Melbourne Symphony Orchestra 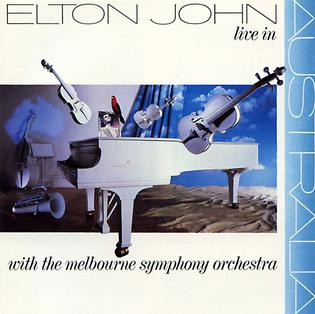 And it seems to me you lived your life
Like a candle in the wind
Advertisement:

Toward the end of 1986, Elton decided to conduct a tour of Australia he called the Tour De Force. It would involve a total of 28 concerts; three in Brisbane, nine in Melbourne, one in Adelaide, two in Perth, and 13 in Sydney. The final show of the tour, on 14 December 1986 in Sydney, was recorded for both an album and a video.

Each concert had two parts: a ten-song set where he played with his backing band at the time, and then an 18-song set where he would play the piano with the Melbourne Symphony Orchestra. The second part would see Elton don a Mozart-like wig. It was a first-of-its-kind concert series for a rock star.

The tour was immensely popular, but not without its issues. Years of substance abuse were catching up with Elton, and he was having problems with his vocal cords. He would frequently have coughing fits on stage. A third concert in Perth was canceled when he suddenly lost his voice; he was ordered not to speak for four days.

Ultimately, doctors found he had benign nodules on his vocal cords. After the tour, he would need surgery. His voice would never be the same.

The live album was popular in the New World, going Platinum in the United States and Australia, and double-Platinum in Canada. Three singles were released: "Your Song", "Candle in the Wind", and "Take Me to the Pilot". His live version of "Candle in the Wind" finally became a hit in the United States, reaching #6 on the Billboard Hot 100, and also hit #5 on the UK Pop chart (higher than the original there as well).

The concert that was recorded for the live album was also filmed for a video release on VHS and LaserDisc. His performance of "Candle in the Wind" became a popular music video on MTV. That song was nominated for Best Male Pop Vocal Performance at the 30th Grammy Awards. He would also receive a special recognition at the 1987 MTV Video Music Awards.

Concert tracks on the video release not included on the album

"Like a trope in your mint, I am dented and spent with high treason":