Western Animation / All I Want For Christmas Is You 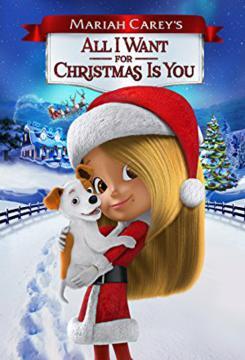 Mariah (right) and Jack (left)
Also known as "Mariah Carey's All I Want for Christmas is You," it's a direct-to-video computer-animated Christmas movie based on the iconic Christmas song of the same name by Mariah Carey (who also narrates the movie).
Advertisement:

The story's about a young Mariah (voiced by Breanna Yde), who has always wanted a dog and has asked for one pretty much every single Christmas for as long as she can remember, but has never gotten it. When two of Mariah's friends (who both have dogs) ask for her help with a charity fashion show that they're organizing, Mariah agrees to help them before they inform her that they inform her that they're "short one girl with a dog." Now Mariah doesn't just want a dog—she needs a dog.

Later on, Mariah sees a puppy named "Princess" at a pet store and decides that she wants to adopt her—however, since having a pet is pretty big responsibility, Mariah has to prove to her parents that she can handle taking care of a dog before actually adopting one. So to prove that, she agrees to dog-sit her Uncle Reggie's dog, Jack, who proves to be a scraggly little rascal—in fact, he's considered the worst dog in the county! Jack turns Mariah's family's perfect holiday preparations upside down in hilarious ways.

While the holiday isn't exactly the Christmas that Mariah wished for, it ends up being more than she ever could've wanted.