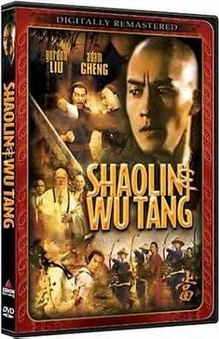 The Hong Kong Shaw Brothers Martial Arts Movie of 1981 staring and directed by Gordon (Chia Hui) Liu. Also known as Shaolin vs Wu Tangnote No, not that Wu Tang, but they were inspired by this movie in some of the early dubs.

Two best friends belong to rival kung fu factions. They are Chao Fung-Wu of Wu Tang sword style and Hung Jun-kit (played by Liu himself) of the Shaolin boxing. Hung Jun-Kit has a sister, Yan-Ling, who has a crush on his best friend, Chao Fung-Wu. Each student, of course, has a master, and both masters are NOT aware that their respective students are best friends. It wouldn't be appropriate since their schools are bitter rivals. Wu-tang's founder was actually expelled from Shaolin!

So anyway, the two friends go out to drink and when one throws some thugs out of the brothel in which the friends are drinking, they both have a friendly sparring match to show off their Kung Fu.

The Manchu Prince hears of their sparring and remarks "The Shaolin and Wu Tang could be dangerous (if they merge their respective styles into a stronger kung fu)." He vows to learn both styles. He invites Hung Jun-Kit's (Shaolin) master over for dinner, but the master refuses to teach him. Worried about a similar reaction from Chao Fung-Wu's master, Master Law (or Lao) he hatches a plan to gain the secrets of both.