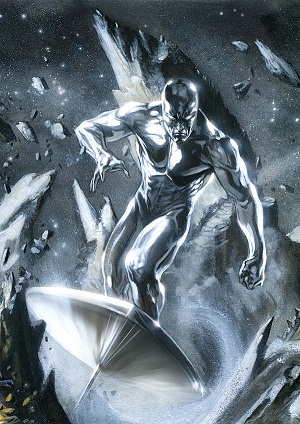 He surfs, and he's silvery.
Spider-Man: Why the surfboard? I mean, don't you think it's kind of, I dunno...hokey?
Silver Surfer: It is not a surfboard. It is—There is a human phrase that covers it. "Form follows function." I need no air, no food, no water. I do not need a ship to sustain me. I need only something that will carry me where I must go.
— Silver Surfer: Requiem, Issue #2, written by J. Michael Straczynski

This Marvel Comics character is the Herald of Galactus the Planet Eater, imbued with the "Power Cosmic". He is silver and rides a surfboard through space. Created by Jack Kirby in 1966, the Silver Surfer has a somewhat controversial origin as he first appeared in the Fantastic Four series (during the "Galactus Trilogy") and was thus assumed to have been co-created with series writer Stan Lee. However, Lee later admitted that Kirby added the character to the story on his own. Kirby felt that a being like Galactus should have a special herald to represent him. However, the Surfer's origin was concieved by Lee (not Kirby) once the character got his own series.

In the Trilogy, the Surfer finds Earth (despite Uatu The Watcher's attempt to hide it from him) and signals Galactus to come devour the planet. The Surfer is then knocked out by the Fantastic Four, but is nursed to health by their kind ally, Alicia Masters. This causes him to decide to protect Earth and joins the heroes in opposing his master. Galactus is then forced to swear not to try to eat the Earth when his own greatest weapon is pointed at him. However, Galactus punishes the Surfer by sealing him within Earth's atmosphere, unable to return to space. The Surfer then becomes a wandering hero. He also helped to found the superhero group The Defenders.

The character proved popular enough to receive his own series (twice). In the first, it was revealed that he was originally Norrin Radd, a man from the planet Zenn-La. He became Galactus' herald in exchange for his sparing Zenn-La from being eaten. However, Galactus decided to seal away the Surfer's emotions after transforming him, to keep them from interfering with his mission, until Alicia reawakened them. In the second series, the Surfer was freed to return to space, where most of his new adventures took place.

The Surfer is still popular and occasionally shows up in other Marvel series. He's something of a Purity Sue, due to his cosmic level of power and having a soul so pure that Mephisto, Marvel's stand-in for (the christian version of) Satan, tried many times to corrupt him. He has become more worldly, Depending on the Writer.

series by Dan Slott launched in 2014. It involves the Surfer traveling the spaceways with an earth girl named Dawn Greenwood, whose fate becomes entwined with his.

Besides Fantastic Four and his own comicbook line, the Surfer has appeared in: