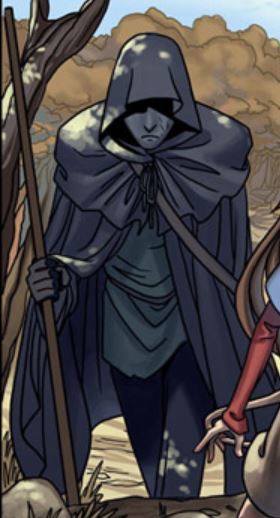 One of the heroes of the comic, Duane is a unique kind of zombie that has retained all of his intelligence and skills. He meant to make a quiet unlife in Sharteshane copying legal documents and reading and writing letters for commission; however, when his condition is uncovered by the leader of the Frummagem crime family, Duane is given an ultimatum: either escort Boss-King Frummagem's daughter, Sette, to her cousin’s place to collect a debt he owes Nary, or have his secret exposed to the whole town. Reluctantly he accepts, though he’s making an effort of trying to make Sette a better person along the way.

The other hero of the story, Sette is the "eldest and onliest" daughter of crime boss Nary-a-Care Frummagem. Tasked with collecting a debt her cousin owes her father, Sette is determined to prove herself as Nary’s daughter, hoping one day to take over his criminal empire.

A captive of the Red Berry Boys, and, so far, the only one not to have undergone the procedure that have left all other captives comatose. All that's really known about him is that he was found sleeping in a ditch before being captured. He's currently working on a plan to free himself and the rest of the captives.

An Aldish wright working for the Red Berry Boys. When he learned Starfish's plan involved hurting children, he quit, only returning after Starfish agreed to release the kids when the job was over... and up his pay. He has a son named Matty who he keeps promising to take to Sharteshane, where they can live a quiet, peaceful life. This promise has been repeatedly broken.

Mathias's eight-year-old son. Blinded during the incident that caused the death of his mother, he relies on a pymaric doll named Chitz in order to see. Cheerful, friendly and naïve, Matty hopes that he and his father will retire to Sharteshane to live a peaceful life. Unfortunately this dream will have to wait after his father signs on with the Red Berry Boys for one last job.

A leading Crescian officer and prominent figure in service to Queen Sonorie.

A famous Crescian peaceguard captain who is trying to find and put an end to the Red Berry Boys. After a violent encounter with Duane and Sette in an evacuated Red Berry Boy hideout, he believes them to be members of the gang and is devoted to bringing them to justice.

A Crescian peaceguard working under Captain Toma who's helping him track down the Red Berry Boys.

Sette's "Da," the head of the Frummagem crime family. He's sent Sette and Duane to collect tribute from his delinquent nephew, Stockyard.

Nephew to Nary Frummagem, he's made his way to Cresce to broaden the family's criminal enterprise. Recently he's become delinquent in paying tribute to his uncle.

One of Sette's cousins, she's one of Stockyard's most trusted enforcers and has been studying pymary out of a desire to make something of herself.

One of Sette's cousins, Knock is a fearsome, brawling woman and has a sisterly relationship with her cousin, Anadyne.

Bastion Winalils, a Jet-caste Aldish wright, a doctor and a member of the Black Tongues, is the man who hired Nary Frummagem to have Sette take Duane back to Alderode through Cresce; he is also the one who gave her the amulet that lets her command Duane at night, and the wright who supplied the spell that keeps Elan's heart beating. He created Timofey, the ghost-boy, but perhaps most importantly, he is the one who "created" Duane, bringing him back to his current state of sentient undeath.

One of the most famous Black Tongues, he is infamous for his experiments with the khert and with First Silver. It was his work that caused the large mass of First Silver filled with memories of pain to be unleashed upon the world. He hasn't been seen in a while though.

A mysterious ghost-boy first seen hanging around the Ripas' house, he works for Bastion Winalils as a manservant, and is actually an artificial creation; he was never alive.

A Black Tongue living in Ethelmik who briefly shelters Quigley, Jivi and Matty.

The wife of Rahm Ripa.

One of the few remaining efheby, with Lady Ilganyag silent some of the Black Tongues have turned to him as their new patron.

A band of slavers and worse who primarily traffic in children (it's an efficiency thing).

Tropes applying to the Red Berry Boys as a group:

The leader of the Red Berry Boys, a sadistic and greedy thug who is making money by smuggling a mysterious substance inside people, first ripping out their organs to make room.

A two-toe working for the Red Berry Boys, he handles the more horrifying side of their supernatural work. His original name—as humans can pronounce it—was Prakhuta, a test subject of Delicieu, Bastion's abusive Mad Scientist Black Tongue mentor. He also now poses as Delicieu himself, taking his place after killing him.

Starfish's right-hand man and second-in-command of the Red Berry Boys.

A petty thug and the first member of the Red Berry Boys that Duane and Sette encounter.

A wannabe wright who's one of the first Red Berry Boys Duane and Sette meet.

Duane's younger brother. Much cooler and more popular with the ladies than bookish Duane, Lemuel joined the military as a foot soldier as a young teenager and eventually became Vliegeng rider, a rather prestigious position for one of Lemuel's caste. Despite their differences, he and Duane love each other, but something about Lemuel isn't quite right...

A strange man trapped in the khert and freed by Sette. He is incredibly violent and dangerous, but seems to have an uncanny knowledge of the khert and the world in general.

An enormous crow with three pairs of breasts, Lady Ilganyag lives in the Khert and encounters both Sette and Duane during their journeys there; while Sette is initially frightened by her appearance, Lady Ilganyag seems to provide them with advice and protection, though her ability to help Sette is limited by her inability to speak her language.

She is the patron of the Black Tongues, the Mad Scientist organization many characters belong to; their very name is a reference to her, since Ilganyag means "Black Tongue" in Aldish.

A powerful weapon wanted by many parties and created by the Black Tongue Delicieu.