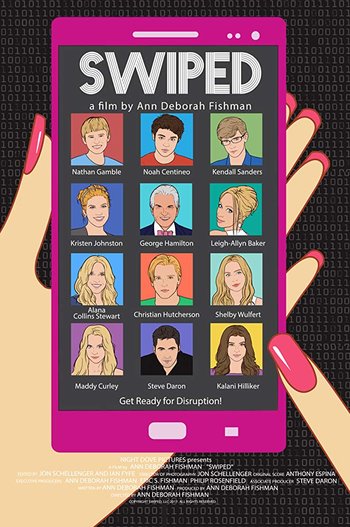 Swiped is a Romantic Comedy released through Netflix on November 6, 2018, directed and produced by Ann Deborah Fishman. It was critically panned, and the creator's response to negative reviews has been...dramatic.

James Singer (played by Kendall Ryan Sanders) is a community college freshman and computer genius mocked for his lack of sociability. It's a stark contrast to his new roommate Lance Black (played by Noah Centineo), a womanizer that wants to get straight to the physical part of a hook-up without any of the "dating" part that might not even end in close contact. Lance's friends are no better, with one not even wanting to give out his last name or other personal details because of how little he wants to actually commit to any one woman.

Soon, Lance realizes that James is the only person in the school's computer science class that can help him with his problem, by helping him create a dating app that removes everything personal from the equation. No names, no profiles, no age restriction — just swipe pictures, get a meeting place and time, and get straight to the physical part. He even bribes James into helping, due to coming from a rich family and promising to afford a transfer to the more-fitting Massachusetts Institute of Technology in return for doing all the hard work. But in the process of getting in "the zone" to develop it, James quickly becomes the dominant one of the two, able to boss around Lance at his whim.

Things quickly go bad when the app goes live, as it turns out that it's fairly one-sided, with the women that sign on feeling empty and disposable. James' involvement with it nearly ruins his relationship with his high school crush, who is also attending the same community college. And even worse...his divorced mother wants to use the app! Can James possibly find a way to undo the damage he's caused, get the girl, and maybe teach Lance the value of a respectful relationship along the way?