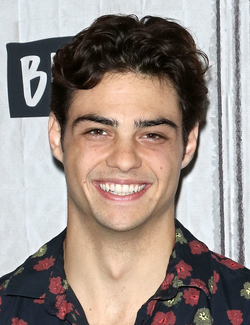 Noah Gregory Centineo is an American actor born on May 9, 1996 in Miami, Florida.

He started out with small roles with Disney's series Austin & Ally, Shake it Up, and Jessie, as well as the film How to Build a Better Boy. He broke out in the third season of The Fosters, taking over the role of Jesus Adams Foster, previously played by Jake T. Austin. He later became widely known for his roles in Netflix's rom-coms, starring as Peter Kavinsky in To All the Boys I've Loved Before, as Jamey in Sierra Burgess is a Loser, and Brooks Rattigan in The Perfect Date. He has also been cast as Atom Smasher in the DC Extended Universe Black Adam film.