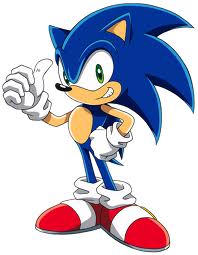 A blue hedgehog who can run at supersonic speeds. He, his friends, and Dr. Eggman are transported to Earth by a blast of Chaos Control. Sonic, Tails, Amy Rose, Cream and Cheese live in secret with Chris Thorndyke and his family, though their presence is eventually discovered. Sonic acts as a bit of an Aloof Ally, often pulling Big Damn Heroes moments Once per Episode. Can transform into Super Sonic when he possesses the Chaos Emeralds. 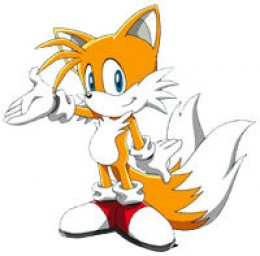 An eight-year old fox with two tails, Miles "Tails" Prower is Sonic's best friend. He is a pilot, mechanic, inventor and sidekick to Sonic. While humble and sees Sonic as his idol, Tails grows to become independent and forms a Intergenerational Friendship with Chuck. He pilots the Tornado bi-plane, and then the X Tornado. Forms a romantic relationship with Cosmo in the third season.

Sonic's friendly rival, Knuckles is the guardian of Angel Island and the Master Emerald. Completely focused on his duty to guard the Master Emerald, Knuckles has been wandering to find it, and keeps to himself. He is short-tempered and easy on forgiveness, but he makes up for it with his courage and fists. 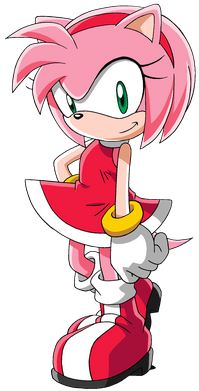 Sonic's self-proclaimed love interest, Amy is an optimistic, strong-willed girl who has a long-standing crush on Sonic and wants to be his girlfriend. While she means well, she can be a bit of a handle and often glomps Sonic. In battle, she uses her trust Piko Piko Hammer. Turns deadly with her Hair-Trigger Temper.

A six-year old rabbit, Cream is the Tagalong Kid of the protagonists. She is very sweet and good-natured, though she misses her mother Vanilla. Cream is accompanied by Cheese, a loyal Chao who usually mirrors her feelings. 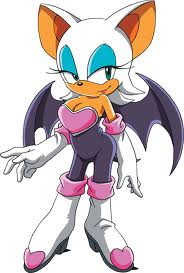 A jewel thief bat who begins neutrally aligned but ends up as a government agent working for the President of the United States. She forms a friendship with her partner Topaz, and has a complicated relationship with Knuckles. 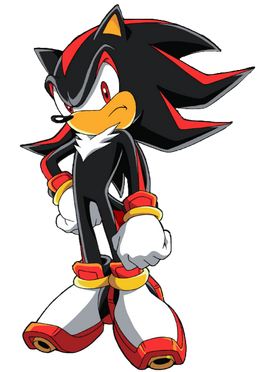 A powerful black hedgehog who is the final result of Project Shadow, a scientific experiment headed by Eggman's grandfather Professor Gerald Robotnik, he is Sonic's equal and rival in all aspects in power. He is released by Eggman to conquer the world, but has his own motivation. Becomes an Anti-Hero in the third season.

A Lonely Rich Kid who serves as the main human ally to Sonic and co. when they are stranded on Earth after Dr. Eggman's botched Chaos Control. Spoiled Sweet by his often absent parents, Chris becomes quite clingy to Sonic and his friends, to the point where he suffers a breakdown of sorts when he learns that they have to return to their own world to prevent time in both worlds from coming to a halt.

In the third season, his 16-year old self researches and successfully discovers a way to travel to Sonic's world, but is transformed into his younger self upon arrival. In spite of this still maintains his older and more mature and experienced mind, and uses his accumulated knowledge to help out Sonic and his friends in new ways from the predicament they've currently find themselves in with the Metarex. 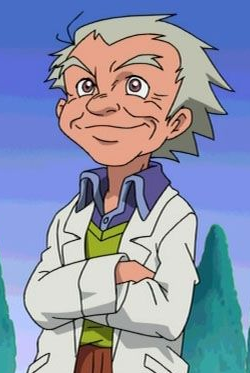 Chris's cool old grandpa on his father's side. He lives in the Thorndyke family mansion with his grandson, where his workshop is located. Because of his technical prowess, he and Tails often work together and quickly become friends.

Mr. Tanaka is a very formal butler who may or may not have watched one too many martial arts movies. He helps around the Thorndyke mansion. 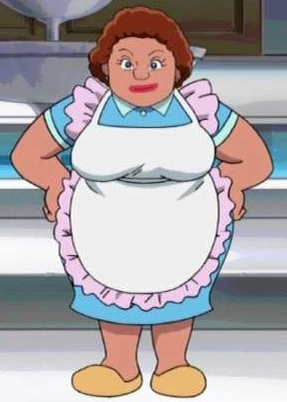 Ella is a pleasant but sometimes-rough-around-the-edges maid and cook who helps around the Thorndyke mansion.

An ancient robot created a long time ago, who is awoken by Bokkun to break Eggman out of jail, but is befriended by Cream. 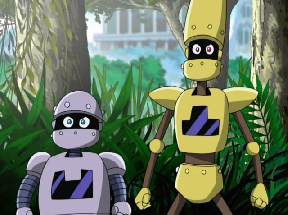 Dr. Eggman's robotic assistants. Docoe is the tall gold one, and Bocoe is the short silver one. Though they originally start out as background characters, they eventually get more direct screentime, lines, and developed personalities. Unlike many incarnations of Eggman's minions, these two don't usually confront Sonic and Co. directly, but rather personally assist Dr. Eggman, usually in whatever base / flying fortress he's currently operating. 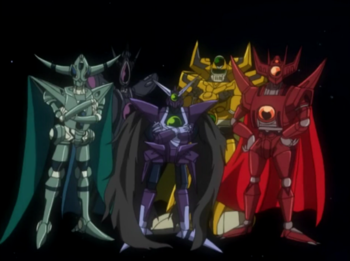 The collective true antagonists of Sonic X, their most active in Season 3. A mechanical empire from another world, they are lead by Dark Oak to obtain the universe's planet eggs, hidden within the cores of every planet in existence. They were responsible for destroying Cosmo's world, actually being the last male members of her species who strived to gain power but corrupted themselves in the process.

Tropes associated with the Metarex: 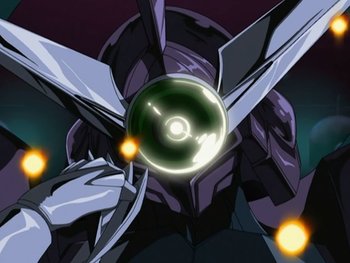 "Oh, perfect: One day they will learn the true extent of my power, but by then they will be too late!"
Voiced by: Joji Nakata (JP), Matt Hoverman (EN), Antoine Nouel (FR)

The Greater-Scope Villain of Season 2 and Big Bad of Season 3. Dark Oak is the leader of the Metarex, having co-founded it alongside his fellow commanders. 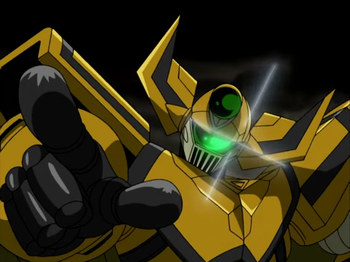 "This task requires strength: It is I who should go; Yellow Zelkova!"
Voiced by: Takeshi Watabe (JP), Ted Lewis (EN), Benoit DuPac (FR)

The very obvious muscle of the Metarex commanders, Yellow Zelkova is a classical Boisterous Bruiser to his core, a chummy fellow when not seeking the next enemy to pulverize with his fists. 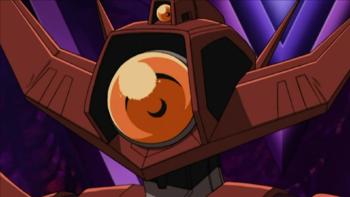 The first of the Metarex commanders introduced outside of Dark Oak, Red Pine has the dubious honor of the shortest screentime of the lot, only physically appearing in his debut episode. 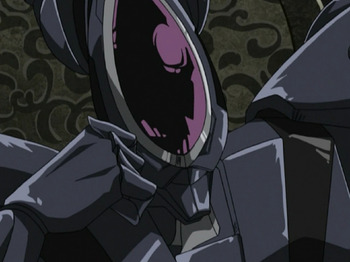 "It's all a matter of brainpower; you see, it's impossible to vanquish a powerful opponent, unless you understand him!"
Voiced by: Ken Narita (JP), Sean Schemmel (EN), Antoine Nouel (FR)

Arguably the most infamous of the Metarex commanders besides Dark Oak, Black Narcissus is a a cruel manipulator of the highest caliber, even to those powerless against him. 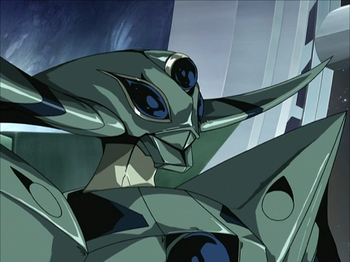 "We'll be watching, and when they least expect it, we strike again; and this time, we'll destroy them!"
Voiced by: Jurota Kosugi (JP), Jim Napolitano (EN), Antoine Nouel (FR)

A brilliant tactician, Pale Bay Leaf is the Metarex commander most often actually observing political affairs; most prominently, resistance fighters trying to rebel against them.

The result of Dark Oak and his remaining Metarex commanders fusing into a giant plant-like creature as part of the forestation project to eradicate all non-plant life in the galaxy.

Tropes associated with the Final Mova: 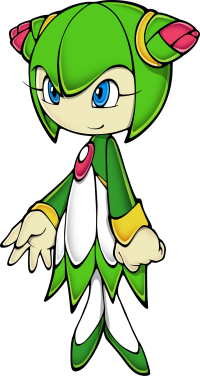 A plant-like alien and allegedly the last of her kind, Cosmo joins the core cast in the second season, striving to defeat the Metarex responsible for destroying her homeworld. She forms a romantic bond with Tails.