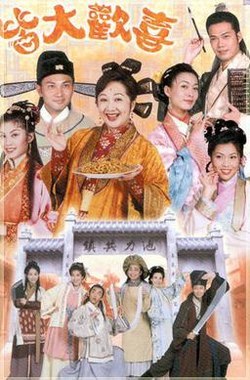 Virtues of Harmony (2001-2005) (皆大欢喜, literally "Everyone Is Happy") was one of Hong Kong’s TVB station’s longest running sitcom series (over 700 episodes spanning two seasons in four years). Originally planned at 150 episodes, good ratings allowed Virtues to have another 200 episodes. The first season (the first 327 episodes) was a period piece, set in the Ming Dynasty. The second season can be considered a modern spinoff, placing most of the original cast in modern-day Hong Kong. Notable aspects that separate this series from a normal sitcom was its (usually) long-term continuity, naming and visual puns, and mix-ups and misunderstandings involving Chinese superstition.

Yau Nim Chi (游念慈) is the matriarch of the Gam family and the owner of a restaurant called Dung Mat Yuen (洞蜜园, a homophone of 动物园 “zoo”) who has a sketchy history and holds the family together. She has three adult children: oldest son Gam Nin (金年, homophone of 今年 “this year”), second son Gam Yuet (金月, homophone of 今月 “this month”), and youngest daughter Gam Yat (金日, homophone of 今日 “this day” or “today”), who are triplets. Gam Nin was a fifth-level government official working in the capital who gets demoted to a ninth-level magistrate in his hometown, Chi Lik Gung village (池力共镇) after insulting the princess. Gam Yuet is the most spoiled and sickly of the three, who works occasionally at the family restaurant but tends to be lazy and play rather than work. Gam Yat as the youngest and only daughter is both bratty and spoiled, likes to argue, likes to be right, and likes to add fuel to the fire.

Nim Chi’s younger brother, Yau Nim Fu (游念富), a proud man who aims to be highly masculine and jealously guards the secret to his famous noodles, and his slow but honest, loving, and dangerously loyal wife Wan Ying Gei (云影姬) live with the family, as well as Lam Yuk Lou (林玉露), Gam Yuet’s bossy and petty wife who constantly bickers with the other women, especially her sister-in-law. Eventually in a twist of strange circumstances Gam Yuet chooses a second wife: Sek Mei (石美), the daughter of pork sellers who values honesty and expects high moral standards from others. A huge source of conflict comes from Ah Lou and Ah Mei vying for their husband’s attention. Soon after Gam Yat marries Gou Yi Hong (高尔康), the village’s poorest man and an unlucky scholar, after one wacky courtship and one huge misunderstanding, after which Ah Yat tries to mold him into the perfect husband.

To complete this family, there’s the runaway Princess Sam Tin (深田公主), who fled the imperial palace with her servant and eunuch after the Emperor misguidedly accepts the Persian prince's proposal for her. They ends up in Chi Lik Gung village and after she breaks a statue of herself which she thought was unforgivably unlike herself, Ah Nin sentences her to manual labor. She chooses a false name for herself, Gung Yan Sou (恭欣素), and by chance Nim Chi mistakes her for the daughter of the family’s savior. Their savior rescued Ah Nin from falling down a mountain 20 years ago and Nim Chi promised him that she would find his daughter and make sure she is well-raised. Because she lost all her money, the princess and her servant move in with the Gam family.

And that’s just the beginning of the story. And characters. Many, many characters.

The second season, Virtues of Harmony II, retained most of the same cast members, changes some of the pre-existing relationships, and adds new characters like Ah Lou’s family. Although set in modern Hong Kong, some imagine spots do take place in period settings, from imperial China to wartime Shanghai to fantasy literature. This season ran for over 400 episodes between 2003 and 2005.