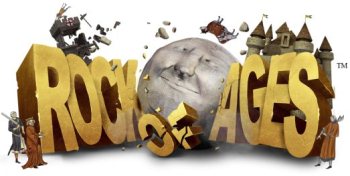 Sisyphus... the king who was cursed to spend the rest of his days pushing a giant boulder up a hill, only to have it roll back to the bottom, forcing him to start over again. After many hours of frustration, he gets fed up and decides to rebel against Cronus by rolling his boulder into Cronus' castle in order to escape from Hades and to freedom. From there, Sisyphus and the angry boulder go on a journey throughout the ages of art (from Ancient Greece to Medieval times, all the way up to the Romantic era), meeting powerful historical figures and smashing their defenses to pieces.

This is the story behind Rock of Ages, a game developed by Ace Team (the minds behind the also-very-bizarre Zeno Clash) and released on August 31st, 2011 for Xbox 360, on September 7th, 2011 for PC and on May 15th, 2012 for Playstation 3. The objective is to roll your boulder into your opponent's castle gate, while preventing him from destroying your gate by setting up towers, catapults, elephants and other traps to slow him down.

This game has nothing to do with the Def Leppard song or the musical.

Tropes used in Rock of Ages:

Tropes used in Rock of Ages 2: Bigger and Boulder:

Tropes Used for Rock of Ages 3: Make and Break:

Example of:
Confronting Your Imposter