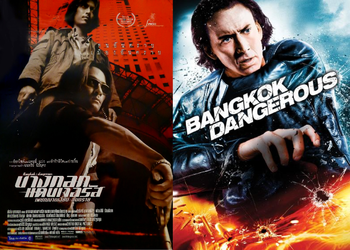 Left is the original. Right is the Caged-up remake.
Advertisement:

Bangkok Dangerous is a 1999 crime/action movie directed by the Pang Brothers, revolving around Kong, a deaf-mute hitman, a professional killer who can neither hear nor see gunshots or victims. Trained to be ruthless without a conscience, Kong is one of the deadliest assassins in the mob, but complication ensues when he falls for Fon, a kindly pharmacist who teaches him to feel love and have emotions again.

The movie is remade by the same directors in 2008, but this time starring Nicolas Cage as the hitman protagonist. Cage stars as Joe, a professional freelance contract killer who operates on a global scale and have his own strict codes of honor, but after an assignment in Bangkok, he starts developing feelings when he fell in love with Fon, a deaf-mute woman.