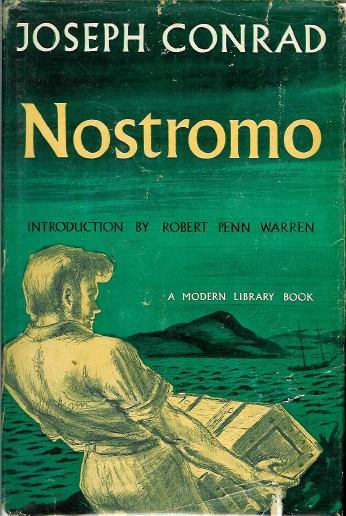 It was another of Nostromo’s triumphs, the greatest, the most enviable, the most sinister of all. In that true cry of undying passion that seemed to ring aloud from Punta Mala to Azuera and away to the bright line of the horizon, overhung by a big white cloud shining like a mass of solid silver, the genius of the magnificent Capataz de Cargadores dominated the dark gulf containing his conquests of treasure and love.
Advertisement:

Nostromo, A Tale of the Seaboard is a 1904 novel by Joseph Conrad. It's famous for its highly intricate storytelling, its psychological complexity and for its cast of memorable characters.

Costaguana is a fictitious South American nation known for its vast silver mines and its constant revolutions. In the capital city of the Occidental Province, Sulaco, the Gould Mining Concession, headed by the wealthy Englishman Charles Gould and his wife Emily, holds sway over government and society. They are able to do so thanks to several vital relationships with the local junta and bourgeosie. But the most important cog in the Gould mining wheel is the Capataz de Cargadores, Nostromo, an Italian immigrant labourer, who leads the dockworkers, breaks up strikes and serves the interests of his employers while being popular among the people. However, a new revolution is arriving in Costaguana, this one threatening the Gould mine itself. Nostromo is tasked with a dangerous mission that makes him question everything he has ever believed.

Nostromo is considered to be one of Conrad's greatest works, and often considered his best by critics and other writers, such as F. Scott Fitzgerald and William Faulkner. It has been adapted for television by the BBC with Colin Firth as Charles Gould, Claudio Amendola as Nostromo, Claudia Cardinale as Theresa Viola, and Albert Finney as Dr. Monygham. It was also invoked as the name of Ripley's iconic spaceship in Ridley Scott's Alien.