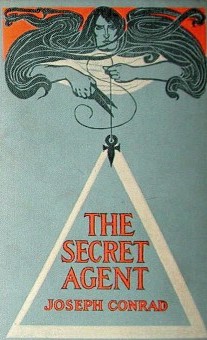 "Presently, passing to particular instances, we recalled the already old story of the attempt to blow up the Greenwich Observatory; a blood-stained inanity of so fatuous a kind that it was impossible to fathom its origin by any reasonable or unreasonable process of thought. For perverse unreason has its own logical process. But that outrage could not be laid hold of mentally in any sort of way, so that one remained faced by the fact of a man blown to bits for nothing even most remotely resembling an idea, anarchistic or other."
— Author's Forward
Advertisement:

The Secret Agent was written by Joseph Conrad and published in 1907. The book is set in London in 1886 and follows Mr. Adolf Verloc and his work as a spy for an unnamed country.

Verloc runs a pornography shop and hangs out with anarchists. He also works as a foreign secret agent. His new boss, Mr. Vladimir, wants Verloc to plant a bomb at the Greenwich Observatory to provoke a crackdown on the anarchists, who he believes are using Great Britain as a refuge. Verloc doesn't want to do it, but the paycheck is the only thing keeping him and his family - his wife, Winnie, her mother, and her mentally disabled brother Stevie - off the streets.

A bomb goes off in Greenwich Park. The police, lead by Chief Inspector Heat and the Assistant Commissioner attempt to puzzle out what happened while Winnie must deal with the fallout of her husband's desperation.

The novel has been used as the source for Alfred Hitchcock's film Sabotage (1936) though it took liberties with some of the plot elements.note And was not the source for Hitchcock's film Secret Agent, which was based on the novel Ashenden, or The British Agent by W. Somerset Maugham. A more faithful adaptation was released in 1996 and starred Bob Hoskins as Adolf Verloc. 2016, it was made into a miniseries by The BBC, starring Toby Jones. A previous BBC miniseries had been released in 1992, starring Peter Capaldi.

"The Secret Agent" provides examples of:

"As to the outer wall of the Observatory, it did not show as much as the faintest crack."